Yesterday I posted about embarrassing situations that we all have faced from time to time. One of these is telling the same story over and over again. I mentioned, however, that I never minded telling my Bat Story, ad infinitum. So here it is again.

It was in May about thirty years ago. It was a warm evening so we decided to leave a window open, without screens, through the night. We could never do this in summer because the insects would be everywhere in a few minutes. However, we reasoned that because it was the first really warm day, the insects wouldn't have got up to speed yet, and therefore, we didn't have to go downstairs and rummage around in the basement looking for the screens. We paid for our laziness.

Some time in the middle of the night, I woke up to a slight scurrying noise overhead. I thought, "Rats, we have mice in the attic." I rolled over. The noise came again. This time it was closer. Logic told me that mice, in the attic, couldn't come closer, because there was a ceiling involved. I opened one eye. A shadow flitted cross the room. Hmmmm mouse with wings translates into BAT!! I lay there for a few minutes to formulate a plan of action.

1. Our infant son was in the room across the hall, with the door open. I had to try to contain the bat in our room, run to my son's room and oh yes, alert my husband to the situation. I waited for the next fly past. I then jabbed my husband twice in the ribs and said firmly, "there's a bat in the room. I'm leaving." I did this very quickly in order to escape, before the next fly past!!

2. I ran into our son's room, who fortunately was still sleeping. From there I was able to reach out and turn on the hall light. I reasoned that bats don't like the light and therefore, he wouldn't come into the hall. I was wrong. He followed me!! At this point my husband woke up, but apparently hadn't heard a thing I had said. He stood at the doorway of the bedroom, starkers (nude) eyes winced together, because of the hall light and tried to make out what was going on. The bat made another fly past through the hall and around the light, which augmented its shadow to that of Pterodactyl. A weird primeval sound filled the air. It wasn't the bat. It was my husband. He had either finally woken up or thought that he was dreaming, in either case, he was vocally responding to the situation with an ooooohawweeeeiiiii. It was almost funny. 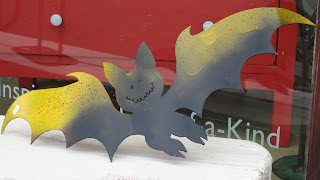 3. From the crack in the door of my son's room, I said, "It's a bat. Put a towel around your head." Some how, whatever Science has taught you, pales in the moment of terror and all you remember are old wives' tales, which tell you that bats will get into your hair and suck out your brains!! Some how my husband found a hand towel in the laundry basket and dutifully covered his head. The picture now is, reeling bat overhead of naked man with towel headdress, making tribal noises!!

4. More instructions from me through the crack, "Get a  broom." He disappeared down stairs and came back with a whisk. Now I ask you, how effective is a whisk, as a weapon, against at marauding pterodactyl err bat? Again, I said, "A broom, get a broom." I did not add any descriptive details about his mental capabilities, at this point, because I needed him to come back!! And come back, he did, with a broom and fortunately wide awake.

5. I was amazed that my husband was able to fell the bat to the floor, in one "fell" swoop, as they say, wrap his trusty head towel around it and toss it, along with the towel out the window, which we then closed shut. Ta Da!! It might have been worthy of a Hollywood movie, except, our son, mercifully, slept through it all; we were both able to get back to sleep and we found the screens the next day. Needless to say, we never opened a window without a screen, at night, again!!

Please tell me one of your amazing stories!!
Posted by Carol Tomany at 4:20 PM