What is it about a trip to an art gallery that makes everyone think that they are artists!! I am not against this phenomenon...in fact I think that it is FABULOUS!! and I think that too many people discredit themselves, as artists. In fact, if we all didn't have to "work" to make a living, there would be so many awesome artists out there, that we would collectively create such an amazing society, where money would evaporate and manna, instead, would fall from heaven....just saying :)

I left the McMichael and on the drive home, the sun was setting. I noted that it was setting five minutes later than on December 21; this gave me great joy!! I also decided that, although we were driving through a very barren industrial area, the sun would make everything magical. And magical it was. Fortunately, I wasn't driving so I could snap a few moments in time. Here they are.

People who live in the burbs are out of this world!! 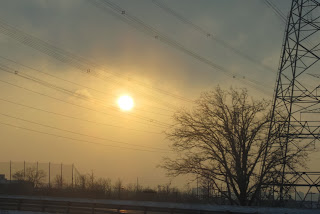 Power to the people!! 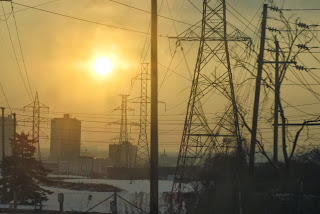 More power to the people!!

Smoke and mirrors - there is beauty everywhere!!