You are known by the cards you send and when you send them :)

I received my first Christmas card, yesterday, Nov 29. Every year we know that there are a few people, usually the same people, that get their cards out early. We have theories about the card senders at either end.

1. Those who get their cards out by the first week in December, are type A personalities, who are super organized, like to have all the chores done and loose ends tied up, you know, the no surprises people. I also happen to love them because, they are the flag bearers; they start the season.

2. Now, when one of these "firsties," can I say that? doesn't send a card early, we begin to wonder, if everything is OK. What has happened in their life to change their usual pattern. One friend is a "stay-at-home-mom." She has two children under 7 years of age and I believe that she sends the cards early, because she is either one of those super organized people or she is bored.

When I was home with children, everyone got a card for every occasion. It was an inexpensive outing and I still got to go into stores for a little (very little) retail therapy.

The second of the "firsties" is retired and lives in England. She has friends all over the world and writes regularly. Actually now she calls regularly too. Sue has managed this wide circle of friends by sending cards, letters and phone calls. I can understand why her cards are early. This is her life's work!

3. There are a few "lasties" too. People whose cards come just after Christmas. One is a very good friend in NZ. I know that she thinks of people a lot and would "hop on a plane" in no time to come and see you, if you were ill or struggling. Her cards are always lovely. I sometimes think that my friend lives in another world, though and surfaces occasionally to get a few things done, like sending cards. 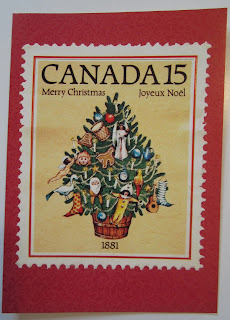 4. Then there are people who don't send cards for years. These are often the people, who have decided that it's a waste of money, or they are never organized enough to do a full mailing, or something. I have fallen into that category from time to time myself.

Now, to have her send this very early card means something. She either A. has finally gotten organized, B. is feeling better in spite of a chronic illness, C. is very bored and reaching out. I'll give her a call.

The picture? It's the Christmas card I sent last year. The picture is a Canadian stamp from Christmas 1881. I actually included in the card, pictures from years ago, that I had of the various recipients. My husband thought that it was the most boring card he had ever seen. Clearly he will never be a stamp collector.

You are known, not only by the cards that you send, but by when you send them. There are more ways than one to convey a message.

Have an awesome day!!
Posted by Carol Tomany at 8:22 AM