I attended my first political demonstration last Wednesday. I know, why did it take me so long. Over the years there have been lots of opportunities for me to get out and show my support for one side or another. There have been wars to protest, environmental activities to support and much more. I guess I had other things to do or wasn't that motivated or had decided to leave the fight up to someone else.

Well, on Wednesday I couldn't leave the fight up to others; I had to get involved. The rally I attended was sponsored by a group of citizens who were calling on Rob Ford to resign, as mayor of Toronto. My only prior notice of the event was at 9:00am Wednesday morning, when I received a post from my city councillor, not actually about the rally; however, someone else posted in the comments the time and location of the rally. I might never have known. 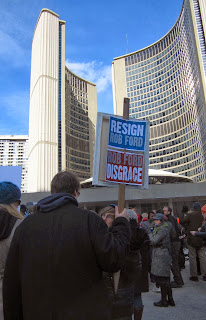 Anyone who believes that public figures should be morally responsible individuals, who set a good example for the community and generally work to improve situations rather than complicate them, has to want Rob Ford out of office. He is a bad example for public "people" every where.

I knew that the group needed bodies. They needed people to turn out and support the cause. I took my body, with all its limitations, onto the subway and headed down to Nathan Phillips Square for the 12:00 noon start. There was a fair turn out, however, I believe that more would have gathered, had the rally been better publicized.

The sad thing is that in spite of all his drug use, bullying and out right criminal activity, there are a lot of people, who would vote him in again. This fact alone says a lot about the morals, or lack there of, of too many people in Toronto.

I plan to be at every rally against him!!

Have a great day.
Posted by Carol Tomany at 5:23 PM