I rarely do the wine buying in the house. My husband usually enjoys shopping, so he goes to the various stores - grocery, liquor, beer etc. Yes this is Ontario - the one Presbyterian stronghold left in Canada. We have separate licensed outlets for both liquor and beer and if the government thought that they could tax food they would - probably do, but keep it quiet :)

Well, last Saturday, we were having pasta with clams and decided that a good baguette would just add an extra touch to the dinner. Le Petit Thuet makes the best baguette in the city of Toronto, however, to get one we had to drive a little out of our way. I decided to make the trip easier on my husband by going along for the ride. The plan was that I would pop over to the bakery for the bread, while he did the wine shopping across the street. Sadly Thuet's was sold out, so I got to spend more time in the wine store. 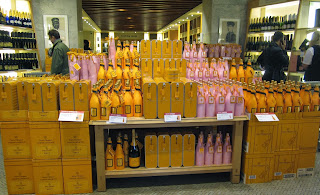 I was both amazed and appalled. Now, I am no puritan. I like a glass or two of wine with dinner fairly regularly, however, I have to question the extent to which booze is marketed in these outlets. Here are some pictures of the massed displays and fancy packaging all aimed at getting you to buy and drink more. The only thing I can say is that I'm glad they weren't in the grocery store, where children would be exposed to them on a regular basis. Isolating alcohol in its own retail outlet hasn't stopped some parents, though, from bringing their kids along for some early training. There were several children under 10 years of age, who were pushing carts through the aisles, while their parents filled the buggies.

OK, I know that the government makes huge amounts of money from the taxes on booze of any sort. And, it was nice of them to provide leaflets, at every check out, with information on government supported rehab. facilities. There just seems to be something wrong in the lavish marketing, the drink but don't drink contradictions and the sparkling messages that are sent out to everyone. 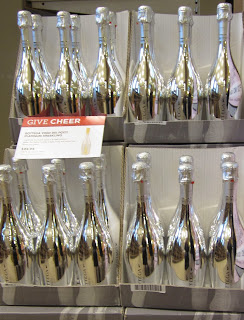 I am not advocating a return to the old liquor outlets of the past, which were more like interrogation rooms. They had a few counters along the wall, where you filled out forms for your purchases, based on a catalogue anchored to the table. You then took this list to another counter where a grumpy employee asked to see your liquor license - yes, I forgot, you had to apply for a license every year or so. You then paid the person in cash, while another employee went into a back room and got your bottle, wrapped it in a brown paper bag before handing it over. I always felt somewhat criminal leaving the outlet.

No, I'm just advocating for a little balance and a little less hypocrisy. By all means allow people to drink, however, promoting a healthy life style and fostering responsible choices in the young, might mean a little less glitz in the aisles.