I think that I suffer from "muse swings" as opposed to "mood swings." I may have mood swings as well, but I too often swing between having no ideas for a post and having too many ideas for just one post. Today I have too many, so here is a list, which you are welcome to mine, at any time. I keep the list in a post, so that I can refer to it when I am experiencing one of those "starved for an idea" days!!

1. Gadgets. I am a sucker for gadgets. The radio alarm sounded this morning with the announcer saying something like. "What is your favourite gadget?" I was instantly awake and waiting for the next line, when my husband hit the snooze button. Rats, now I will have to hunt it down. I did murmur, "bottle opener" under my breath, as a mild protest, but this was ignored.

So now I had to find out the answer. I goggled "favourite gadget" and found more sites than you would have time to read before breakfast. There were the top 10 gadgets for each year, everyone else's list of their favourite gadget and the cream de la cream of lists from the gadget junkies' bible - Popular Mechanics. I actually used to read my father's copies of Popular Mechanics. While my girlfriends read fashion magazines, I read about gadgets. Maybe this is why I can open a bottle with a defunct nut cracker, but can never get my lipstick on straight, even though the tube itself is a very neat gadget :) But I digress. Here is a list of 101 Gadgets that changed the world. 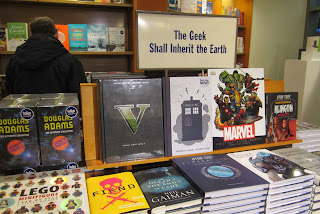 2. Travels With Charley. We walked to the book store last night as an outing. My husband bought a new John Gresham and a new Ian Rankin and I took pictures. I noticed that there was a re-release of John Steinbeck's "Travels With Charley" which I had read years ago. I was a little stunned to see that this new release was to celebrate its 50th anniversary. It's a great read!!

3. Circles. Yesterday's post was about "Looking for Circles Day." I realized that I had more to say on the topic of circles. I hadn't even touched on the symbolism of the circle or quoted a poem or two on the subject or included several songs on the theme of circles.

4. Geeks. One of the book displays at Indigo (book store) had the heading, "The Geek Shall Inherit The Earth." Does that include people who write about gadgets? 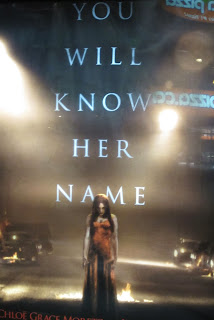 5. Carrie. There was also a display of the latest Stephen King book. Since I had just taken a picture of a poster for the new Carrie movie, which was on at the cinema next door, I felt that I was zoning in on a post. Also since some of the scenes for this new Carrie were shot a year ago last summer at the high school just down the street, I felt that I had some insider information. I could also use my son as a reference, since he has seen both movies and actually spent 5 years at that very high school - grades 9-13.

So I'll just freeze these ideas for the moment and thaw them out when I need an idea or two for a post. I do have to catch up. I think that I am behind two in my blog a day for 2013.