Some how I missed the fact that October 27 was National Tell A Story Day. It is celebrated more in England and Scotland than in North America, but it sounds like a wonderful day. I'm not very good at making up stories. That being said, I am always making up stories about people I see in restaurants or on the bus. When I take my walk, often through the cemetery, I wonder about the names on the headstones and imagine what their lives might have been like. OK, I make up stories, just not very good ones :) Anyway, since I don't have a piece of fiction to share with you, I will tell you a true story. It's how my ancestors came to Canada. Everyone has one of these stories. They are the building blocks of a nation. 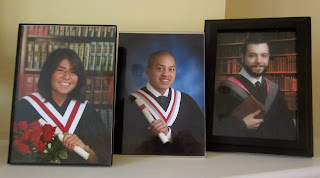 It all started in Ireland with one of the potato famines.  Most of the peasants who worked the land in the mid eighteen hundreds "over there" were very poor. Huge families and burgeoning costs kept most people barely able to provide the necessities of life. When their single source of income, the potato harvests, failed, survival meant leaving the country.

My great, great-grandmother, Anne, was one of those survivors. She set sail with her nine-year-old son and two young daughters, for Canada. Her husband, Tom, would stay in Ireland and work, in order to pay their passage. Fortunately, the foursome survived the hardships of the journey and finally arrived in Mount Forest to start a new life. Anne and her family were given crown land and joined a community of similarly displaced people, who helped each other clear the land, build homes and cement a community.  It was ten years before her husband could join her.  I am still in awe of a woman who, with the help of a young boy, managed a farm and two younger children, in a strange country, with bitterly cold winters, often miles away from friends and neighbours.

But manage they did. The young boy went on to marry and have children of his own. In total he and his wife raised fourteen children, five girls and nine boys.  One of those boys was Peter, my grandfather. Time passed and Peter married Rose Smith, who gave birth to six children, five boys and a girl. One of those boys was my father, Charles. His siblings also had children. In total Peter had 30 grandchildren.

No one seems to have kept in touch with Peter’s brothers or sisters, but if any of them were as prolific as he, the family could have populated a small town. Homesteaders came from strong stock.  They were survivors.  Last week my father turned ninety-nine.  All of my cousins are still alive and my father has an older brother, who is quite hale and hardy. Many of my cousins went on to have three or four children. We may have to have a reunion one day, just to have a head count.

That's my story for National Story day, albeit a little late.

The picture? My three kids - Thank you Anne.