Poetry and Blogging from the NY Times

I did today, what I often do when I don't have an idea for a post. I keyed random phrases into the title bar of my MAC. The phrases usually consist of terms that interest me. This morning it was "poetry in the news." It flushed out this wonderful column from the NY Times, Poetry and Blogging by Paul Krugman.

His article is more of a mini review of a book he is enjoying, Tom Standage’s Writing on the Wall: Social Media — The First 2,000 Years. The book defines social media as exchanges of information among people who are affiliated, rather than a top down dissemination of data. The book's treatise is that social media has been going on for hundreds of years, mainly through the exchange of letters that were then shared, copied and exchanged some more.

In the Tudor court these letters were often in the form of poems, because poetry allowed you to discuss sensitive topics elliptically, while still displaying your cleverness. "You could even build a career through poetry, not by selling it, but by using your poems to build a reputation, which could translate into royal favor and high office — sort of the way some people use their blogs to build influence that eventually leads to paying gigs of one kind or another. " 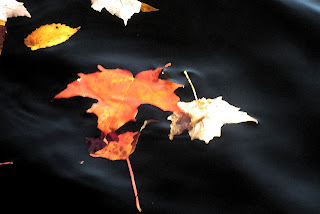 The article ends by wondering why so few of us read poetry these days?

The first comment to the blog noted that poetry is alive and well in popular music. I beg to differ. Lyrics are poems, where the music comes first and the words are added later. Real poetry is where the words come first. Some of these poems have music added later, however, the words have always come first.

Here's a Shakespearean sonnet for a Fall day. Have a good one.

That time of year thou mayst in me behold (Sonnet 73)