I was skimming through the paper today, when I came across an article that actually mentioned my street. This is rare. The article was about the tricky business of street parking. We live in the inner city, in an area that was probably developed in the late 1920's or early 30's. This means that they built houses with the understanding that people might own a car, however, just one and that they would have to be able to park it on their property.

In order to maximize space, houses were often built with a shared driveway. The idea was that one access road to two separately owned parking spots would save about 15' of land for every two houses built and surely two cars would not be fighting for access to their respective parking spots at exactly the same time every day. This idea might have been logical, but it did not take into account human nature, which is often not that logical.

For example, no one considered that one of the houses may have an owner that was too lazy to drive their car the whole length of the driveway and park it in the garage at the back. This owner might decide that they would just take over the one available access, park in it and bully the other owner into submission. There are probably more court cases over shared or mutual driveways filing through the city courts on any given day then any other land claim suits. 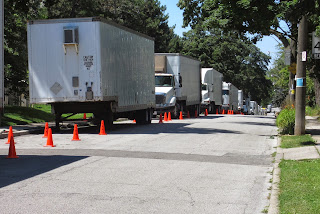 We have a mutual drive, which we share with very agreeable neighbours. However, we both have two cars each and given that our particular driveway is at a 45 degree angle and extremely narrow, both households have decided to park on the street. Well, so it seems has everyone else. There is a constant battle for parking spaces. Collectively we monitor how people park. Newcomers are asked to park between driveways to allow for two parking spots. However, this is only after we have tracked them down and pointed out that for the last month or so they have taken up two parking spots with one small car!

We instituted permit parking as well, to limit the parking to residents. However, if you have workmen in for a few days, they are deemed illegally parked and often get tickets. Unhappy contractors are not a good idea. Permit parking also limits visitors from parking more than an hour on the street. Not bad, if you have pesky in-laws, but difficult to have friends over for dinner, unless it's a bolt and run affair.

The article in the paper was about how workmen insure their parking spots, by lining the curb with pylons and threatening signs. I ignore these, of course and move the cones, so that I can park. However, once parked, I am loathed to leave because I could lose my spot. It makes for a lot of healthy walking :)

The picture? battlements in the parking wars :)

Have a wonderful day!!
Posted by Carol Tomany at 9:48 AM