Swing Music...not what you think!!

This is really cool. At a bus stop in Montreal there are 21 musical swings for people to use night or day.  Here is a description of the installation from the goodnewsnetwork -


A  team of Montreal designers whose goal is to bring magic to everyday events, has placed an interactive installation of musical swings alongside a Montréal city street -- next to a bus stop.
A fresh look at the idea of cooperation, the swings play a tune when pedestrians move in unison rather than independently. The result is a giant instrument made of 21 musical swings; each swing in motion triggers different notes, all the swings together compose a piece, the sounds of which emerge only from cooperation.
The project stimulates ownership of the public space, bringing together people of all ages and backgrounds, and creating a place for playing and hanging out in the middle of the city center.
"A traveling version of the project is currently being made for these collective moments to spread around the world," says the website.
Learn about the designers here: www.dailytouslesjours.com
You will have to go to the good news site to actually see a video of people (of all ages) using them. It really is magical. Pop along to the company's website, as well, to get updates on their other installations and their planned giant sing-a-longs. 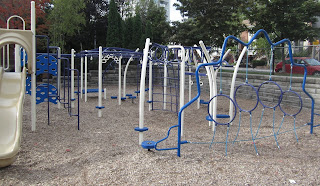 Imagine actually getting paid to design and install "things" to bring magic into everyday events, such as waiting for the bus.

Now I wonder what can they do for -

1. Waiting in line at the grocery store.
2. Waiting in gridlocked traffic.
3. Mowing the lawn
4. Vacuuming
5. Going to the dentist

I guess this is where I-Phones and Twitter come in. However, there is no physical exercise in these devices. I'm not sure what you could add a teeter-totter to, or a giant slide, or even a climbing frame. I always liked the ball room at Ikea. Years ago, Ikea also had large TVs at the check-out playing funny Bill Cosby monologues. I'm not sure why they stopped. I know that the building that houses Corus Entertainment has a giant slide and I am told that high tech companies who employ a lot of creative minds have games rooms and lots of other fun stuff.

Still these bits of recreation are not in public places like the swings are. It's a little like bringing the park to the people!!

The picture - maybe we need a few of these around the city. Then again maybe your work days involve a lot of climbing through hoops, hopping over obstacles and generally hanging in there until it's time to slide home :)

Have some fun today!!