I follow Mental Floss on FB. Sometimes they are sane and sometimes they are right over the edge. I think that I need your opinion today, because I need to remind myself which side of the line I'm on.

Today's feed from Mental Floss is from their store for Foodies. Now, I know that they have some cute T-shirts; I didn't realize that they also sold other items. Insane T-shirts, I can live with. Everyone is allowed to go a little crazy with a picture and a slogan; but when you start actually manufacturing gadgets that are a little odd, then I have to ask myself, "where am I in all of this?"

First there were the "Oh aren't these cute," items, such as the measuring cups that look and nest like Matryoshkas dolls and the pizza cutter that looks like an electric saw. Now, I also liked their Grammar Mug. Yes, a coffee mug with a grammar lesson on it. Just what you need to warm an English teacher's heart :) Then there was the Bar-10-Der; it's a tool that looks like a Swiss army knife but has 10 different bartending tools inside. Being a gadget person that enjoys the odd drink, I don't think that I can live with out this one!!

Then there was the spatula shaped like a finger, as in go "lick your finger" or your finger-shaped spatula, now do you see what I mean about being a little odd!! The spatula was followed closely by the bicycle wine rack which let you caress the bottle between your thighs as you cycled home...or closer to that "edge." I pulled back a bit with the salad bowl and servers, in the shape of large hands that clipped to the side of the bowl; this was clever. However, I took a giant leap towards the line with the Obsessive Chef's cutting board. It's a wooden chopping board with various grids ingrained on it, for those who have to have every chopped bit exactly the same. It's a nuclear scientist, turned foodie's dream. Dinner may never be served, but every chopped vegetable could find its way to Mars and back!! 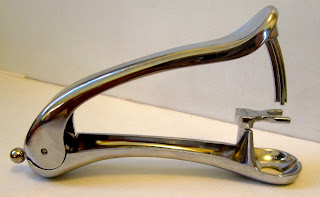 Cherry Pitter - you can get one too

Then there were the kitchen towels with Pi printed on them, meh! I created some once with poems on them; they were just a little warmer. Also for the math minded, there was the formula mug, a cocktail set in the shape of a chemistry lab experiment and drinking straws that could be joined together like Tinker Toy pieces. All of these I could appreciate and avoid!!

It was the gift wine bottle set that really got me shaking. What crazed mind gives a friend a bottle of wine in a wooden contraption designed as a puzzle. The idea being, that you have to solve the puzzle, i.e. get the bottle out of the contraption, before being able to open and serve the wine!!

I completely lost it though with their last two mugs. One featured Henry VIII and his six wives. As you fill the mug with something hot, the wives gradually disappear. This mug was followed by another with the picture of Van Gogh. You guessed it. As you pour in the steaming liquid, the ear disappears. I'm really edgy now, however, I have resolved never to have my own avatar on one of those mugs :)

Are these just cute gifts or are they completely out to lunch?

The picture - a repeat of my cherry pitter, for the obsessive nit picker or is that nit pitter :)