.......at least if you live in the West. Well, maybe the title is a little dramatic because these processes or inventions are probably as undramatic as it gets. Many are overlooked, dismissed as common conveniences or completely unknown to younger generations. However, if you live in the West, particularly in the Americas, you are likely to be alive today because of the following:

1. Window Screens - most people, living in North America, spend their entire lives either looking out of windows that never open or looking through windows covered by a fine mesh of metal. When I lived in England, I loved the fact that few, if any, windows had screens. You could have a window open all day and rarely see an insect in the house. I love open windows!!! However, because of the insect populations in the "new world," screens are a necessity. They keep out flies which used to spread several deadly diseases, killer bees and mosquitoes, which now carry West Nile disease, to mention a few.

2. Cotton - Cotton can be washed, even boiled, easily. Making clothing, bedding and other household coverings from cotton meant that regular cleaning controlled or eliminated lice. These arthropods apparently destroyed Napoleon's army by infecting the soldiers with typhus. Hemp ramie and linen have properties similar to cotton; however, the material of choice back then, apparently, was wool. It may have itched for several reasons.

3. Fluoride and improved dental hygiene - An abscessed tooth is a cruel way to die. When they were debating whether or not to add Fluoride to Toronto's water system, it was a long and tortuous battle, however, the socialist won, and maybe the dentists lost, because tooth decay has been reduced dramatically over the years.

4. Air Conditioning - I know that people lived without air conditioning for millennia, however, it is credited with cutting the death rate in the US on hot days by 80%. We put a localized unit in upstairs for the bedrooms, but then Toronto rarely has prolonged spells of temperatures over 90F. I still know of many homes that do not have air conditioning.  People just use fans.

5. Botts' Dots - These are raised ceramic nubs between road lanes that were invented by a chemist, Elbert Botts. Unlike cat's eyes, these devices act more like rumble strips adding a tactile alert to drivers who may cross over a lane at night or in bad weather. Anyone who has driven a secondary road or a gravel road, where there are no markers, knows how helpful small guides, such a lane lines, cats' eyes and botts' can be. 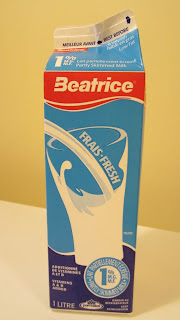 6. Pasteurization - unpasteurized cow's milk may carry meningitis. My mother-in-law's first child, a daughter, Katherine, died at the age of eight months from drinking unpasteurized milk. They lived on a farm in Scotland, so it wasn't a lack of knowledge. I know that there is a huge raw milk movement, but pasteurization, would have saved her life.

7. Unconscious bias - I have never heard of "double-blind, placebo-controlled" clinical trials. It is a method used in testing medical treatments, where neither the patient nor the clinician knows whether they are using the real drug or the placebo. It is a way of making doubly sure that we can trust the drugs that have been tested. However, even with these strict methods, there are still unknowns and problems with medicinal drugs. Good to know that the standards are always being tested as well!!