I have always wanted an AGA range!!  This is ridiculous; I know. But ever since I saw a picture of one in an old Gourmet magazine, I have coveted an AGA. There is something about the aesthetics of their design that goes beyond the functional. Then, there are the 2, 3, even 4 ovens. Really what would I put in them and all at once, as well!!

I know that I would cook too much and then eat too much. I would also have to take up baking, roasting and ultra slow cooking to make use of all their amazing features - sigh!! Some how just boiling an egg on an AGA would be a bit like using an elephant gun to kill a fly. Maybe not the best analogy, but you get the idea!! 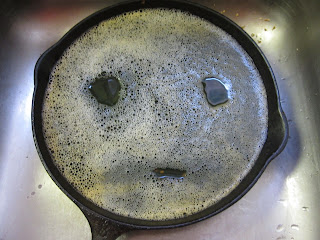 However convincing these arguments may be, they haven't stopped the wanting, the lusting, the salivating. I guess that I'll just have to get my cast iron fix from my ancient frying pan. Well really, how many people actually need a cast iron fix to begin with and do you smoke it, snort it, not inject it, I hope - gives a whole new meaning to the term Iron Man.

Have a wonderful day!!
Posted by Carol Tomany at 7:10 AM