2013 has been declared the anniversary year of the T-shirt. Apparently in 1913 the US navy issued T-shirts, as undergarments, to its sailors and well things just evolved from there. An article in the Toronto Star this morning on the evolution of the T-Shirt describes how it has gone from white undergarment to celebrated overgarment in 100 years, with the help of people like Marlon Brando, James Dean and a few others.

The internet has responded with a host of sites, such as  http://www.tshirtbirthday.com - a T-shirt birthday site. Another site lists the 100 most Iconic T-shirts. Finally an Oregon based site, lets you share your favourite T-shirt,

My favourites are on the Mental Floss site, with slogans such as -

Thomas Aquinas - The original Deep Fat Friar
Apathy - I could take it or leave it
Veni, Vedi, Wiki - I came. I saw. I edited collaboratively.

T-shirts and their slogans say so much about the wearer. For the most part I just inherit T-shirts. I have several from the rehab centre my husband attended after his angioplasty. Actually it doesn't say anything about "heart" so we often connect with others who have been in another type of rehab.

Then there were the Chicago T-shirts we got as part of the city bus tour we took. Unfortunately they were all XXL.

Here is one that I actually bought several years ago. I just happened to wear it, quite accidentally, on one of my walks in Cinque Terre. 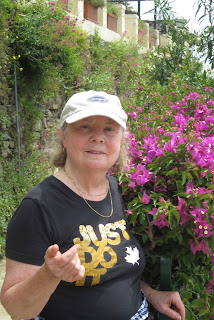