Or may be that should be "Awe Shucks." Every once in a while the supermarket that we use has a special on oysters. This weekend they had Malpeque Bay oysters at the amazing price of $13.00 for 33 oysters. When you consider that oysters in a restaurant can cost as much as $3.00 or $4.00 each, Metro's price was a steal!!

My husband loves raw oysters and I was determined to try more than the one I slurped 30 years ago, so we bought a box. However, since neither of us had ever shucked an oyster before, I spent some time on YouTube watching videos about how to shuck an oyster. There were dozens to choose from and all were very informative. This one was particularly entertaining.

Next, we went to buy a shucking knife. Since we were in buying crab cakes for Sunday dinner, at our local fishmongers - De La Mer, we asked if they had any oyster knives. Our server, just opened a drawer and handed us one - no charge. We were a little stunned and also felt a little guilty because we hadn't bought the oysters there. We will another time.

Back to the kitchen and the shucking. It was a little slow going, but my husband managed to open half a dozen in about 15mins. One could loose a lot of weight on a diet of oysters!! They are only about 6 or 7 calories each and you probably burn up that much shucking them. We decided to have 3 each as a appetizer with a little lemon and Tobasco sauce.  They were delicious. 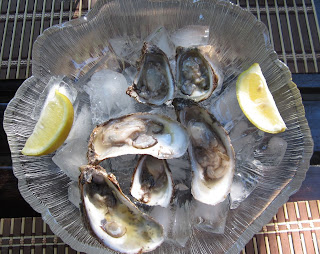 We also tried opening a few on the BBQ. It worked for some. Others had a strong smell about them so we threw them out. Although the instructions said that they could be kept in the fridge for a month, I think that I would try to get fresher oysters and do them both ways again.