OK, the title may be a little misleading. I was reading an article this morning about the site "Goodreads." Apparently one of their blogposts was about books that people abandon - Fifty Shades of Grey and J. K. Rowling's The Casual Vacancy were the most commonly abandoned books lately, according to the site.  I haven't read, or more correctly, started to read and then abandoned, either of them, but from the reviews I can see why many would.

The blog also lists Joseph Heller's, Catch-22 and J. R. R. Tolkien's, Lord of the Rings. Now I can understand the later - it's long, it's allegorical and I know I would find it tedious. However, my husband loves it and has re-read it several times. On the other hand, I loved Catch-22 and I have even thought of re-reading it. My husband, I know, wouldn't go near it. I am amazed that we have stayed together as long as we have - more than 30 years. 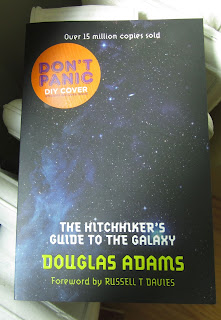 Back to abandonment, in books, that is. I know that I am guilty of putting down a book and never picking it up again. I don't usually do it after the first 50 pages though, which is usually the rule of thumb for abandonment (can I say that?). I generally stop reading a book within the last 100 pages. I did that with Edward Rutherfurd's, Sarum. I was fascinated by the early descriptions of the evolution of England, however, the closer it got to the present, the more I lost interest. I never finished Irving Stone's, The Agony and The Ecstasy either - probably because I'd had enough - lots of agony for a little ecstasy. I know that I was enjoying Leon Uris' Trinity, however, a terrorist act by the IRA stopped me in my tracks, err pages, and I didn't have the heart to finish the book.

I have put down Douglas Adams' The Hitchhiker's Guide to the Galaxy, however, I intend to finish it. I just have trouble with Fantasy.

I joined the site Goodreads.com today and while I was picking out my list of preferred genres, I came across a heading that I had never seen before, Manga. I had actually heard about these Japanese style comic books, but had never seen them classified as Manga before. Now I was thinking of turning my Nanowrimo book into a graphic novel hmmmm.

Have a wonderful day!!
Posted by Carol Tomany at 10:15 AM