..........would still be Rex or maybe Roy after the French Roi. Somehow I feel that I should be betting on George, since that seems to be the bookies' favourite and they should know, their livelihood rests on picking a winner!!

So now a soppier part of the world will discuss what they will call "Baby Windsor." I won't be discussing it, not at dinner anyway. My husband has declared the dining room a "Royalty Free Zone." Just wait 'till my daughter gets home on Friday!!

I am fascinated with names - they're right up there with lists and challenges and naming a person is usually a challenge, unless you name them after a father, as in William Junior or William the second. And choosing a name usually involves a list.  Here is a proposed list of names from those in the know:

George - from the Greek' meaning "earth worker or farmer." Probably not a good choice since the tool that he is identified with is a spoon (silver) not a spade! Now an interesting diminutive is Geordie.

Albert - from the German, meaning "noble and bright." Now this has possibilities. His great, great grandfather was originally Albert (Bertie) if you remember The King's Speech and he was a very well respected royal. However, it does draw the family closer to the house of Orange than they would like to be, I suspect.

James - from the English, meaning "he who supplants." Given the looming Scottish referendum, this would be a good political choice, as James is a favourite name in Scotland.

Alexander - from the Greek, meaning "defender or helper." This name also has strong Scottish ties, however, the diminutive is Sandy, rather than Alex or Alec and people tend to polarize around the nickname. 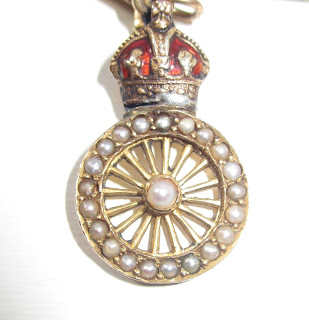 Arthur - from the English and it seems as though its meaning is somewhat obscure, although the legend of King Arthur isn't. Most sources agree though that the name Arthur is linked to nobility. It would certainly create a few more movies of the fabled King!!

John - from the hebrew, meaning "graced by God" or sometimes "beloved of God." Unfortunately a previous Prince John wasn't so graced. He is a villain, along with the Sheriff of Nottingham, in the Robin Hood legends. More movies, maybe!!

Personally I prefer Jack. It is a variant of John and it does nod to the flag of Britain - the Union Jack. Britain could use some help with unity these days.

What ever his name, there is always hope that this little one won't end up as a ridiculous example of what privilege can do to a person - we already have enough of those around :)

The picture? The closest thing to Royalty I have. It's a watch fob of the Royal Fusiliers, turned into a charm.