We have ended up eating out every night so far because that is a large part of the holiday for my husband. The weather has been good, so we leave about 7:00pm when it's still light, go to an area and just read menus. We could eat in with food from the market, but it's so much easier just to eat out!!

We have spanned the gamut from fairly cheap - 5 euros for pizza to somewhat expensive 12 euros for a prawn (shrimp) cocktail. Every meal has had its high points and in some cases the setting and the waiter has made up for the lack of inventiveness in the menu. But this is an explore, adventure vacation and I love surprises!! Here are a few of the meals and the restaurants.

This was a pretty one on a pedestrian street (no cars) just down from St. Peter's.  The food was good, but they were out of red wine - so we had to have white - not a great hardship. The kids had pizza and I had a simple pasta with fresh tomatoes, my husband had one with mushrooms. We ate inside because it had started to rain. I don't remember the name and the restaurant itself was OK. However, they were a bit shell-shocked having catered to tourists all day.


This was my son's pizza. The presentation was a little unusual. He just cut up the toppings and spread them around. On second thought, because the area is often filled with tourists, maybe the restaurant presents it this way because it would be easier to remove what one didn't like from the pizza. I am sure that they get their fill of, "can you do the olives, but hold the egg etc." Not sure if this is the reason, but if so, it's a little sad!

This sign out in front of another restaurant in the area probably says it all. BTW the restaurant was packed in the evening when we went by. 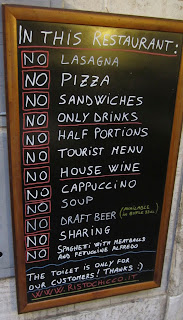 Almost everywhere in Rome is filled with "tourists."  This is not a bad thing as many are just in awe of the place. However, it is always nice to go to a restaurant frequented mainly by Italians - maybe not from Rome, but certainly not from the guide books.

We were warned about the Gelato beforehand. Apparently a small group had gone into a cafe for Gelato and came out having paid the equivalent of $80.00 - $20.00 each for a dish of Italian ice cream!!! After visiting the cat sanctuary, where the kids spent about half an hour petting 200 cats, my son said, I think that I need to wash my hands. Good idea.  We went into a sidewalk cafe for Gelato, while they used the facilities. With a quick look at the menu, we realized that we would be paying at least $40.00 for 4 ice creams. We left and since we were near the Ghetto area, which is a must see, we went in and found Gelato for the equivalent of $6.00 a serving - it was delicious!!

It's always good to do your homework on a vacation. You can't cover everything, but you will be a bit wiser and you will feel a lot more confident. I like to believe that a lot of people get their feet wet by setting out in a tour group (and there are many here) but then maybe they will come back for more on their own.

I loved Barcelona, but I think that I may have an obsession with Rome! We have a friend who went to Rome once, loved it, and has gone back twice a year for the last 10. She is now fluent in Italian and it wouldn't surprise me, if she sold up and retired there. It's got a vibe.

More pictures and food next post. Missing you all!