Booking a reservation on-line to see the Sistine Chapel and the Vatican museums worked!!! We booked for 10:00am. Arrived at 9:30. There was no line at all for the aisle marked, "individuals with on-line reservations." We were admitted to the lobby right away. Now there was still a crowd and we had to go through security and go to a side counter to pay. But all this went smoothly and we followed the moving mass along the corridors, rich with paintings and tapestries to the chapel, where no picture taking was allowed. It was crowded, but it looked the same as it did when I saw it 40 years ago. Some things I never want to see changed and this is one of them!!


After the Sistine Chapel, we gave the kids a choice to either leave the building then or go back and see other parts of the museum. They wanted to stay and just hang out a little bit longer, so we browsed through the galleries, in the awe!!  Almost no one was there - a welcome break from the "throng." We had some fun at the end of our tour by sending post cards from the Vatican with their stamps. It's an interesting reminder that the Vatican is/was a separate country with its own monetary system, postal system and Swiss Guards. 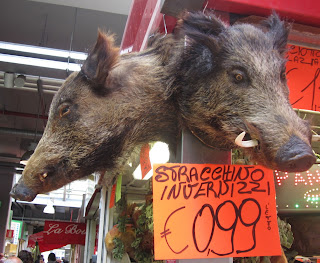 We left the museums and again offered the kids a few choices: 1. Go out for lunch or 2. Buy something for sandwiches to make back at the apt.  They chose the later and as we were working out the best way back we stumbled upon this amazing market. We spent about half an hour buying ciabatta, porchetta, tomatoes, fresh cherries and strawberries in season, some cheese and the tiny first leaves of lettuce. There were several hands to carry it all back to the flat where we feasted!!

More on it's way. I have taken pictures of the restaurants we went to, the meals we ate and the streets we walked. I just need some time in between going here & there, to post. Also given that the wifi system has been a little "iffy," scheduling has been tricky. Plus it didn't help that we blew the fuse on the electrical outlets and had to reset them. We also had to ignore the LARGE BLACK LETTERS that said PLEASE DO NOT TOUCH ANY OF THESE ELECTRICALS!!  Fools rush in...especially when we needed to charge the computers, the batteries for the cameras and, oh yes do some laundry!!