We got to Monterosso in good time even though our train was 30mins late leaving Rome. This was more of an inter-town train, than an inter-city train. Its final destination was Torino, however, it stopped at most of the towns along the west coast of Italy. In our four hours on the train, we got great views of the sea, the hills and in Carrara, the mountains, where a lot of the marble for the gorgeous statues comes from.

When were still on the train, just before our last stop, my husband was able to call the owners of the place we were staying. The conversation sounded a little like something out of the movie “Murder on the Orient Express.” The train was a typical European train with compartments and the conversation went something like this: “turn right on leaving the station, walk 200m and I will be wearing a blue coat!” 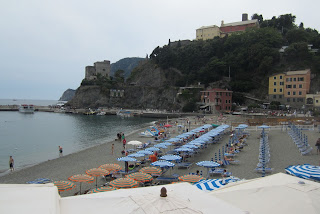 We found the apartment also on “Home Away.” The owners are a retired couple. Maria’s English is as good as my Italian, but her husband speaks a smattering of several languages. Their home is in Genoa, however, they own at least two properties here and actually live in Monterosso 4 or 5 months of the year. The appliances weren’t as complicated as the ones in Rome, mainly because they were older and fewer – no dishwasher or dryer. We have 2 bedrooms, but just one bathroom. However, the flat is bright and airy with new windows, a small patio and  easy access to the town, beach and walking paths. 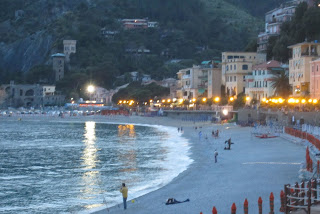 When we arrived it was hot and sunny. We bought a few groceries and found a nice restaurant for dinner. Stuffed mussels are a specialty of the area, as are anchovies, any style and pesto with almost everything. I had bruchetta with pesto instead of tomatoes, my husband had the anchovies and the kids had prawns. Two of us had the stuffed mussels, which were steamed first, cut in half and stuffed with bread crumbs and a green herb, probably basil. The shell was then closed and they were sauted in a tomato sauce – very delicious!! 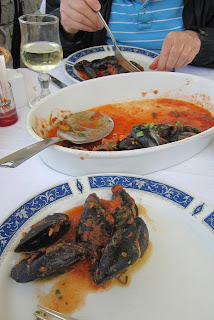 Sunday it rained all day with a tremendous storm at night. We ate in and worked on a jig-saw puzzle of one of the other towns, while praying for better weather. During the day, between the periods of rain, we managed a small hike to a look-out point near the town. Unfortunately, we also found out that several of the paths between the five towns are closed because of severe mudslides a year or so ago. Workers are still trying to shore up the cliffs with wire mesh to prevent further erosion. Since tourism is now the main industry in the area, the farmers don’t work the land as much as they used to so there is more erosion. Ironically it’s a kind of self-destruction. This burst of tourism is destroying the very paths that the tourists come to walk. 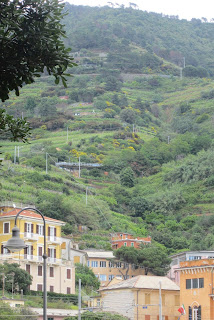 More tomorrow Ciao!!
Posted by Carol Tomany at 5:10 AM