The walk we attempted yesterday to a look out point nearby was really very steep. I caved in about half way along, after we had been walking uphill for about half an hour. It is actually part of a longer walk to Levanto and we did meet several groups, who were just finishing the longer, four hour walk. Sigh! The next day I didn’t feel that badly about giving up, because we witnessed a helicopter rescue of at least 3 people from the look out point that we were headed to.

oday was much more successful. We activated our Cinque Terre passes, which cost 35.00 euros each for two days and took the train to the next town, Vernazza. From here we planned to walk to the third town Corniglia, but were told that the path was closed. We found the entrance to the route, and spoke to people coming down from the walk. They said that there was a little construction, but you could pass it easily, so we decided to do it. Again it was a steep climb, but there were places were the path leveled out and the views were amazing. I loved being able to see several towns all at once perched on cliffs reaching out to the sea.
It is actually better to arrive in Corniglia than to start there, because the climb from the train station to the town is up 365 stairs and that’s before you actually start your walk. Although we took sandwiches and had a lunch break in a small olive grove towards the end of the walk, we stopped at a little restaurant and had some bruschetta and a glass of wine before going down the 365 stairs to the train.

Next, we took the train back to Monterosso to regroup. The kids had stayed on the beach, meeting and chatting with people. My son was invited to join a group for an organized soccer game. He has been very adventurous on his own. My daughter, who is always good at planning “her life,” hasn’t adapted that well to the trip. She spends a lot of time in the apartment, while my son gets out and about exploring. Some people travel better than others, I guess.

We still continue to eat out  every night!!! It really is one of the highlights of the day. The seafood is fabulous and we have managed to find a table, under an umbrella, at a little restaurant that has uninterrupted views of the mountains, town and sea - Life is good. 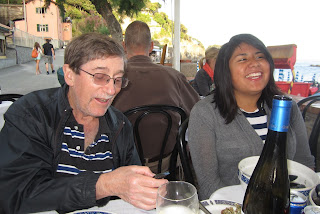 Another walk tomorrow.
Posted by Carol Tomany at 11:21 AM