When everything old is new again...

Hot on the heels of May the Fourth (force) is an Audi commercial that just might win awards.  I have to pay tribute to the creative minds that dream up these amazing scenes. Who would have thought that you could "star" Leonard Nimoy and Zachary Quinto in a car commercial that included a rendition of the Ballad of Bilbo Baggins.

Here is the video.


And here is a link to some awesome comments worth reading. They're at the bottom of the video, but on this site not YouTube.

Sorry, if I didn't have my 1998 Honda Civic, which incidentally has just lost its chrome logo - maybe getting a little old too - I would be tempted to replace it with an Audi based on this commercial. If I had the money, that is. Alas, I'm a sucker for a good ad - believe me I can be "had."

However, if I could really have my "druthers" I would have this one! The picture was posted in my photography group by Steve Brown. It's a keeper. 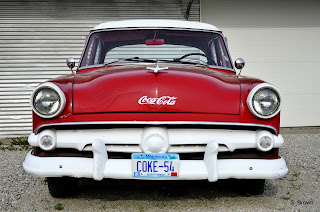 I don't think that anyone would ever do an ad for this car. Maybe a little too retro with the Fonz and Happy Days. It's interesting how Star Trek survived and prospered - the magic of other worlds.

Have an amazing day!!
Posted by Carol Tomany at 6:47 AM