The car is their real clothing....

I sometimes have trouble finding a particular poem on the internet, because I have remembered a line or two, but have forgotten the title and/or the author. Yesterday, I was looking for a poem to go with a picture that I had taken that reminded me of summer somewhere in small town North America. I had forgotten the title of the poem and the author, although I had presented it many times to many classes of 15 and 16 year olds. This was at a time when kids had their own cars or got the "use" of the family car on Saturday nights.

I keyed in the line that I remembered and actually brought up most of the poem, but not the title or the author. The poem fragment was posted by a student who needed input on an assignment and was asking for help finding similes and metaphors.  I realize now that the internet is raising a generation or generation(s) of people who know how to ask people for the answers that they need. They will probably never have to figure things out for themselves.

Here is the poem fragment - it is from a poem about "cars" and their importance as status symbols, entertainment, and social "vehicles."

"Every five minutes they turn, with their tires like sirens, tusking the dirt up the creek road, and drive back through town.
Slowing down on main street, maneuvering between the farmers cars, hooting at girls on the pavements who reply with little hen movements, laughing, waiting.
The boys sport leather jackets and levis, but that's their underwear. The car is their real clothing at Taylor's corner they turn again, their Hollywood mufflers making sounds furious, derisive, vulgar. Like a bear growling and breaking wind, and roar through main street again." 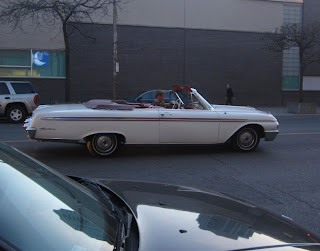 I know the anthology that published the poem  -  "I Am A Sensation."  I may just have to buy it on Amazon. I also have to read a few more recent anthologies. This was new when I was teaching and my sister was actually a student in the class taught by one of the collaborators on the collection. The students themselves submitted many of the poems from their own poetry research.

It's an awesome collection and I have to believe that there are many more in the years since this one that I should read. Any suggestions?

Anyway, it's summer in the city and somewhere there is someone in a car or there is someone remembering, someone in a car that would burn through a tank of gas cruising back and forth on Main St. Something there is to be said about repetition, familiarity, home towns, common folk, simple pastimes. I wonder if Norman Rockwell ever painted a car.
Posted by Carol Tomany at 9:07 AM