Yesterday, I posted about the healing power of music and linked to an old folk song that I had never heard before - The Broom of the Cowdenknowes. I decided to do a little more research on the song and the plant called Scotch Broom.

Broom comes in many varieties and grows almost everywhere. In most cases it is a weed, which blooms in May, with small yellow flowers on course stems. No doubt it got its common name "broom" from the fact that cottagers would bind these branches together to create household brooms. Ironically I first encountered Scotch Broom (the invasive species that grows in Scotland) when I worked in a flower shop. It is often used as a filler in decorative arrangements.

Cowdenknowes is an area in the southeast of Scotland known as The Borders. It is beautiful rolling country with ancient hills that lies a little south of Edinburgh. The folk song tells a story which occurs often in traditional ballads. It's the tale of a young woman, in this case a shepherdess, who falls in love with a handsome stranger. In most of the stories, the woman becomes pregnant and is left on her own or worse, she is banished. In this song the shepherdess is banished, but finds her handsome stranger in France. As it turns out he is a wealthy lord and marries her, however, she is not happy and pines daily for her homeland, represented by the "broom." 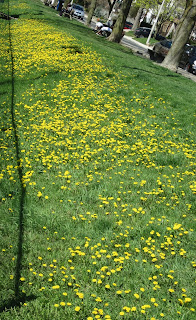 The story is a common theme that appears often, not just in ballads, but throughout literature. It changes with the country and the customs, but the anguish of being abandoned, of living far away from family and friends and the common things that you enjoyed, is shared by many.

Maybe, if I were "forced" to live in a tropical island, I would miss winter - I'm not sure; I would have to really think about that. I know that if I had to live somewhere quite arid I would miss foliage. But I can't say that I would ever really miss our common weeds. Somehow I can't see myself pining for a Dandelion.

Incidently a sprig of broom was the emblem of the Plantagenets and the name dandelion comes from the French "dent de lion"- tooth of the lion. Now I could live in France :)
Posted by Carol Tomany at 9:18 AM