Every year we plant Marigolds in the garden. They are bright showy flowers and if the aphids don't get them in the first week or so, they will bloom until the frost. It suddenly occurred to me that I knew nothing about Marigolds, except that they are annuals here in Canada and are often used in companion planting because they keep garden pests away from vegetable crops. 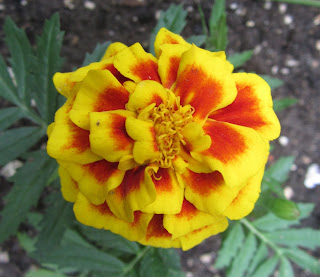 It was time to consult my "go to book" for garden stories "Garden Flower Folklore." I bought it years ago when I was deciding what to plant in the garden. I wanted a garden that told stories. Well, Marigolds were originally found in Brazil by a Portuguese explorer in the 1500s. Since then they have been propagated all over the world, including Africa, India and Europe. In 1985 (it's an old book) 300 million Marigolds were cultivated in the US alone. I'm sure there are a lot more now.

Marigolds were sacred to the Aztecs. To them it was a living symbol of the Spanish massacre of their people for their coveted gold. In the language of flowers, Marigolds mean pain and grief. The flower, though, does have many uses. Its leaves were used to heal wounds and remove warts. The blossoms are used as a natural yellow dye and the dried flower heads are added to chicken feed to give egg yolks a good colour.


I always thought that Marigolds were poisonous and said to cause blindness. There is an old folksong that tells the story of a woman who decided that she wanted to do away with her husband. She made him a meal of eggs and Marigolds and shortly thereafter he went blind. He decided that he couldn't live this way and that he wanted to drown himself. She said that she would help him get down to the river. Well, when she was about to push him in, he stepped aside and she went in instead. It's a lively tune with an ironic twist to the story.

I googled Marigolds and blindness only to find several links to a story of a doctor who cured himself of a degenerative eye condition by consuming Marigolds. I'll let you decided who is right.