Delorean to the rescue!!!

I had decided to head out to the North Face outlet which is/was about 20mins from the house to buy the few remaining items that we needed for the trip. The thought of the deal or the find prompted the two youngest to "hop on board." We set out for the outlet via the back streets. "Why go direct when you can maybe find something interesting on the side roads." And find something interesting we did. No sooner had I turned off the main street, when we saw the "back to the future car."  My daughter went nuts.  She spent the next 15 minutes telling me how rare this car was and how it had a cult following etc..etc.. Well by then I was several blocks away and had decided that I wasn't going back for a picture. 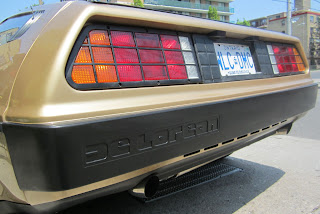 Inside - the gear shift's a skull.

Fast forward 30 mins. We arrived at what should have been the North Face outlet only to find that it had moved, in spite of every on-line resource telling us that 21 Vaughan Rd, was the right spot!! It wasn't!!  So, dejectedly, we headed home. As we got closer to the spot where we had last seen "the car," I decided to make sure that I drove down that street.  Sure enough it was still there. I gave them the camera to take pictures.  I took one myself for the challenge, but they got the rest. A Delorean had saved the day!! 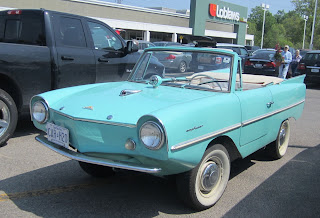 However, this is not the end of the car saga!!  Later in the day my husband and I went to the garden centre and parked very close to an amphibious car.  It was so cool!!  The license plate read Car H2O. But it's not over yet. An hour or so later, I went to a sports shop - still on the hunt for good walking shoes - and I parked behind a Lotus.

This was a day for cars.  Probably has something to do with travelling.

Have an awesome day!!
Posted by Carol Tomany at 7:51 AM