I wonder if I can predict the day, just by the FB entries that I bother to read. At 7:00am in a semi somnolent state, I often cruise through my wall posts. I am not fully awake and it is almost as though my subconscious were directing my hand.

In the last 45mins. I have read a post on "what not to feed chickens." I do not own chickens. Actually, I would love to own chickens, but we can't in the city. I can understand and abide by the rules, even though others don't. Some people surreptitiously keep chickens in their yards. I know I couldn't even attempt this, as my yard, though long, is quite narrow and overlooked by a 7 story apartment building - someone would hear them or worse smell them. Also, every time there was a threat of an avian flu virus spreading, I would panic.

No my subconcious is just doing some wishful thinking. It's that time of year - Spring and I also want to plant a vegetable garden, but I would have to dig up the flowers - sigh!

The second post I read was on the health benefits of bananas. Fortunately, I love bananas and I am hoping for this goodness to beam up my health quotient and maybe help me lose a pound or five :) I skipped past all the posts on chocolate in its many tempting forms - yes. After all I did have some on Saturday for a birthday!! 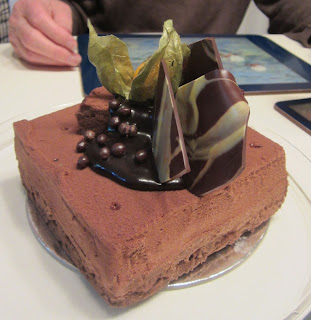 I read through the comments for someone wanting the French translation of "mittens." It was getting pretty serious with the difference between Quebec French and French French. The answer was - "moufles" are real mittens with a thumb and "mitaines" are fingerless mittens. Problem solved, I was worried about that :) Well, given that I had to wear mitts on the weekend - mid-May. It was freezing out there!!

I must be anticipating another cold day, because I paused over a recipe for raw almond milk from Cher Fauvel. That's a drink made with raw almonds, not raw milk. I had read about it before on her post the other day, but another food blogger that I follow Anita-Claire Field suggested adding rum to the drink - a "nut nog" maybe, for very cold days :)

I think that I may be fully awake now and I can predict that it's going to be a cold, but healthy day with a french accent and although I won't be passing any chickens, I may encounter a penguin or two - I looked at the picture and will read later a post about the release of Penguin 2, by Bob Gelwick. Not sure what it's all about, but the temperature will be right, at least!!