I was a little surprised to hear that the song at the top of the pops in Britain or pretty close to the top anyway, was “The Wicked Witch is Dead.” The song itself is from The Wizard of Oz, however, it ‘s being played a lot in Britain these day because of the death of Margaret Thatcher. It is also a testament to how much the country hated and still hates the Conservative Party's platform of privatizing industry, diluting the strength of the unions and generally moving Britain from a strongly socialist country to a more central position, politically.

Thatcher had to put in some pretty tough legislation and clearly she was hated for it.  She was obviously a person who didn’t have to be loved. She created for herself the role of the “wicked witch” and seemed to find opportunities to enact the character again and again. 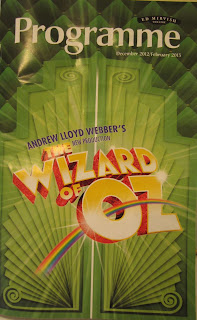 I know in the theatre some actors can become synonymous with a role, so much so that they seem to become that character in their real life, off stage. Perhaps, this is what happened to Margaret Thatcher. I always remember when she brought in the “head tax.” It was never scaled to a citizen’s ability to pay. If you were a pensioner on limited means, you paid the same as someone of virtually unlimited means.

My mother-in-law was in the former group and I remember the family breathing a sigh of relief when the tax was abolished. This tax also signaled Thatcher’s demise. It might have been the equivalent of the bucket of water thrown on the Wicked Witch in the classic play. Eventually leaders fail, regimes collapse and society gravitates to a middle ground.

I do like the song that Andrew Lloyd Webber added to his production of the Wizard of Oz – “Home is a Place in Your Heart” – presumably with out witches.

Have a magical day!!
Posted by Carol Tomany at 5:46 PM