Yes, Virginia, there are angels...

My daughter is in Toronto for the week before she heads back to Thunder Bay to do her second in a series of 3 practicums for her teaching certificate. True to form, she has managed to pack out her vacation week. First, she got a job as a camp councillor for a Spring Break children's camp at Harbourfront. Then on the Saturday of her two days "off," she met with camp staff for a day of planning and on Sunday she booked to do a re-certification of her first aid training in order to update her lifesaving qualifications - whew!! I was exhausted and I was just dropping her off.

Well, let me tell you, as easy as the phrase "drop off" is to say, it was not as easy to actually do. I drove her to her camp meeting on Saturday because she had lots of "flotsam and jetsam" to take in. We left early and I'm glad we did because we had to negotiate some major construction and re-routing of traffic along the main thoroughfare to the camp. This was not fun. At one point I was going the wrong way on a street that has always been two-way, until, of course, yesterday!

Fortunately I got home in one piece. On Sunday we set out to another major road block on the other side of the city! Her First Aid course was on the campus of York University. Since she had googled a map of the location before we set out, it should have been easy - right? - wrong!

1. The major north-south street we needed to take to reach the red exclamation mark on the Google map was closed - construction for a new subway. Google didn't tell us this!

2. I decided to go further west with the intent of doubling back and going north again (are you still with me?). This was not easy because a number of side streets were not named, so it was difficult to work out exactly where I was in time and space - in space I was lost, in time I was late!

3. After much to-ing and fro-ing, we were close. However, we couldn't actually reach the intersection indicated on the Google map because it was barricaded, again for the subway in progress. Finally I decided to drive through the barricades - the benefits of a small car and check out the buildings at the designated intersection.  Alas, we were no where near the building hosting the course, because Google had pointed us to the main administration buildings of the university, which were closed on Sunday. We needed to get to the library! Panic!!

4. Eventually we found a map, oriented ourselves and headed out to find the library - at the other end of the campus, with most of the roads closed because of construction. More confusion. Finally, after asking several students where the library was and having them look at us as though we were asking for directions to Mars, we found one chap who thought it was somewhere "over there." I always thought that a library was the heart of a university, apparently not - I probably should have been asking for directions to the pub!

5. At one point we had to ditch the car and head out on foot, following walking paths and mercifully, now, signposts!! At last, we reached our destination, negotiated the labyrinth of halls and found the meeting place. No one was there. My guess was we were so late, that everyone had already been taken to the testing site.

6. Where was security when you needed them? We asked a few more people for help. Everyone had their own idea of where we should be - the pool, the gym, the medical building!!! - nothing made sense.  Frustrated, we decided to abandon ship - err campus and find another time to take the test, at another place, that was perhaps a little saner.

We were nearly out of the building when we heard someone call us from behind. A good looking young man appeared from no where. He had overheard our conversation. Because he was also there with his girlfriend, to do the "recert," he was able to tell us that the test had been delayed an hour - something do do with moving to daylight savings. Apparently the 19 year-old who was conducting the program had slept in - I was not filled with confidence, but I was relieved to meet a kindred soul. 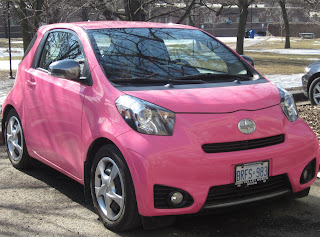 My daughter was thrilled, that she could now do the recert; she had someone to talk to, and she could dispense with her frantic mother, whom she believed was only complicating her life!!

The picture - something maybe an angel would drive and probably not through the barricades :)

Have an uncomplicated day!!