The return of the organ grinder....

In my last post, I mentioned the economic downturn that we are in now and how difficult it is to remain optimistic for young and old. The young have dim prospects in the job market and the old have seen their nest eggs shrink with the falling markets.

Time to get inventive, like the organ grinder I saw outside the St. Lawrence Market the other day. He was soliciting money for his time and tunes. The sign on his collection basket, said something about needing to add to his old-age security, because it really wasn't covering the basics. 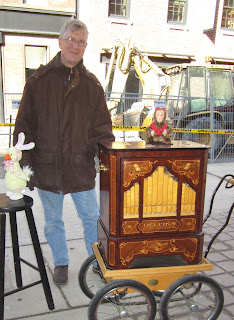 From the picture you can see that this chap doesn't look like your average organ grinder, who, according to wikipedia, was often an itinerant nomad, moving from place to place or an immigrant, working as an entertainer, for lack of a better job.

The article in wikipedia went on to describe not only the organ grinder, his instrument choices and his assistants, often animals, but also the cruel treatment of organ grinders at the hands of the police and the general public.

There was a time when organ grinders were banned in many places, most notably New York City in 1936.  As a result of this ban, many of the organs were destroyed, including their barrels, which were often the only record of a popular song of the day.

The New York law was repealed in 1976 and the first rally of organ grinders was held in April - 2006 at Coney Island. I know that we have a lot of street performers now. In fact, Toronto hosts an international buskerfest, every year, in August. Usually, though, these people have real talent. However, enterprising individuals, with more moxie than skill, might still be able to earn a modest income by resurrecting an old occupation - the organ grinder.

This could in turn, restore an entire industry - people to make the organs, artists to create the music, businesses to purchase and rent out the organs, workers to turn the cranks, breeders to supply the animals and perfomers to act or dance to the music.

A new take on the daily grind, perhaps.

Have a wonderful day!!
Posted by Carol Tomany at 7:15 AM