I always remember a friend of mine, telling me once that she was sitting beside a young man on a plane and during the course of their conversation, she asked him what he did for a living. He said, "I'm an Alchemist." She was amazed!!

Five hundred years ago, this might have meant very little. Back then Alchemy was a practiced art. Now a days, no one lays claim to literally being able to change base metals into gold. Figuratively, people may use Alchemy as an analogy to suggest that they take something seemingly worthless and transform it into a money generating product - the pet rock comes to mind, as do a few ".coms" from the '90s.

Here is a definition of Alchemy:

Alchemy was a systematic, mystical philosophy integrating astrology, numerology, and even theology into the study of matter. To the alchemists, physical matter was an expression of underlying essences and principles. The reactions of various substances, then, could be explained as the attraction of the male and female principles inherent in them. Gold, the perfect metal, represented to the alchemists the perfect balance of the four elements (earth, air, fire, and water), and the perfect balance of the male and female principles within them.

Alchemy in all its many forms has fascinated writers for years. There are plays, movies, books and poems about the "science." Here's a short poem.

The Alchemist's Chant
by K.C. Ball

Sulfur into Oxygen; solid into gas.
It really isn’t difficult, if you halve the mass.
Gallium to Silver. Palladium to Lead.
Wait! Those ways are backwards; it’s the other ways instead.
Plutonium from Gold, will give a glowing tan.
Argon turned to Krypton gas is really super, man!
Transmutation is a snap, simple as can be;
but don’t expect it every time — just periodically. 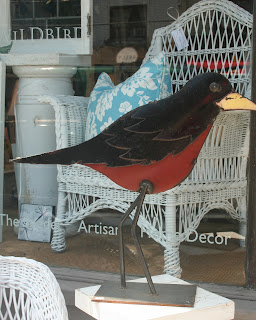 The pictures are from a shop that I pass often. The owners bring in the work of an artist who creates really lovely ornaments from discarded metal. Today's Alchemists may be all those people who create wonderful "things" from recycled waste!

Be an alchemist every now and then - bring a little magic into your life :)