In celebration of wiper blades...

I had to go to the garage, yesterday, to get a new wiper blade for my '98 Honda Civic.  I had had a small victory about a month ago, re-attaching a blade that had come off in the snow. However, when it happened again, I decided to cave in and get a new blade.

Every once in a while, especially when "things" get difficult, I try to remind myself to celebrate the positives and look on the brighter side. Here is what happened yesterday:

1. I drove to Canadian Tire to get a new wiper blade - celebrate a) it wasn't raining or snowing so I could drive without a functioning blade on the driver's side and it's always the driver's side, isn't it? Celebrate b) getting out of on-street parking with foot-high snow banks.

2. When I arrived at the store, I found that the most convenient entrance to the store's parking lot was blocked by cranes - "renovating to serve you better," - well, maybe not today. Celebrate being able to make a U-Turn in traffic and head back to a less convenient entrance. Finally, after all of this manoeuvring, celebrate that the store was in fact, open!!

3. Because of the building chaos, there were very few people in the store so I was able to snag a sales clerk, right away, to get me the correct replacement blade. I paid an extra $5.00 to have another employee put the blade on. Just as well I did, because this blade and several others didn't fit. At one point there were 3 technicians trying to attach  one blade!! Celebrate that I had decided to have the store do all the work or I would have been struggling out in the cold trying to affix a blade that wasn't going to work anyway. And then I would have had to convince the staff that I had bought the correct blade and that I knew how to put it on.

4. I should also celebrate the time I was left waiting in the car while "they" tried to figure out the problem! I was glad that my car was positioned right in the middle of the shop or I might have been left in a corner all day, completely ignored - I can read the headlines now - "forgotten driver found dead of boredom in maintenance garage" or something like that!!

5. I was able to alleviate some of the tedium by taking pictures and speculating on why most cars there, and everywhere else for that matter, were grey or black - maybe another post!!

6. Finally the mechanics tried another type of blade; it worked. I did however have to go through the exchange process, which took longer than the blade replacement process, before I could actually go. Celebrate "freedom!"

As I was leaving the garage, I did noticed that the car next in line was a Rolls Royce. I have been trying for a few years now to get a picture of the Spirit of Ecstasy, which I failed to do once because I had forgotten to put the card back in my camera. Well I didn't get one, this time either, sigh! Celebrate that I was in good company - someone with lots money also uses Canadian Tire for repairs. And celebrate, that I will get my picture opportunity at another, even better, time!! 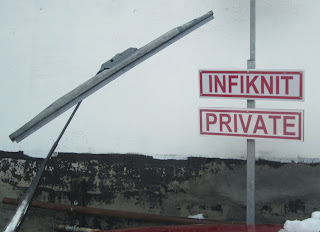 Here is the storied blade - waving a victory sign in celebration!! OK it's not the oscars - but we find our drama, where we can!!

Have an awesome day!!
Posted by Carol Tomany at 7:21 AM