Just your average everyday word. Doesn't it just roll off the tongue :) I found it on a fascinating site www.onelook.com. Every hour this site generates 5 words that get an unusually high number of searches.  The site also lists reasons why these words might be popular, at that particular moment.

Yggdrasil - pronounced (igdrazil) - was the most popular word yesterday. It comes from Norse Mythology and means - great tree of the universe - a huge ash tree whose roots and branches hold the earth, heaven and hell together. The word apparently was searched a lot because in the news a dance company was using it as a theme, a Viking folk group had just released and album by that name and a Malta based gaming group had used it in some capacity.

You just never know what the world collectively is thinking at any given moment, but "onelook" might be able to give you a hint. Right now, as I am writing this blog - 7-8:00am EST, the most popular word is "gravid," which means "in an advanced stage of pregnancy." It is also used to mean loaded, burdened, heavy.

I guess I'll just have to wait until tomorrow to find out if this remained the most popular word of the day or if another surpassed it and why. 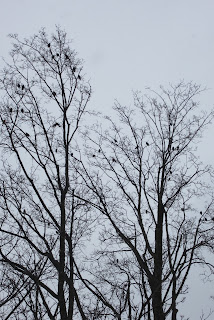 The picture is my "Yggdrasil." It's not an Ash tree, it's a Maple tree and it may not hold the universe together, but trees keep my body and soul together, plus the birds love them, even without leaves.