I was feeling a bit cabin fevered yesterday. By noon it had been snowing for 24hrs and we had more snow than we knew what to do with. I went to work in the morning but decided to leave at noon, before I got really snowed in. The city plows do this neat trick of clearing the main roads by filling in every driveway and parking lot exit. So I almost couldn't get out of my spot.

Then on the way home, my windshield wipers decided that they'd had enough and just gave up. Fortunately I just had a few blocks to go. But I did have to get out at every stop light and wipe the snow build up from the window - It never rains but it pours - well, you get the idea.

I debated walking to the bank; but then I thought "nah," this could be done another day. So now what to do. Yes I could read, or knit, or do some housework - perish the thought. Surfing was easy and my MAC was open anyway. Maybe a little music to soothe the soul.

I started out with John McDermott. Here's Loch Nagar


However as the day wore on, and that closeted feeling became more intense, the music choices moved as well. At the end I was listening to some fairly obscure Welsh folk songs from Cerys Matthews. Here's Myfanyw.

You have to be in that sort of crazy space. Finally I took pictures of the snow from the back window. The sun should shine tomorrow, so I'll try to get some better shots, before I'm blinded by the light!!

Above are the garbage cans and planters. Below is the BBQ - for frozen dinners, of course!! 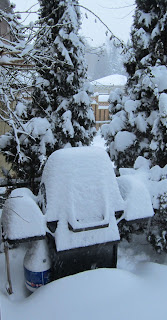