I just had to repost a column by Tabatha Southey. It's a satirical essay on why she believes that the Pope has stepped down. It's hilarious.

There has been much speculation around Pope Benedict XVI’s resignation. For a week now, rumours have swirled on the Internet that the Pope is retiring within the Vatican City to avoid arrest in some kind of lawsuit. Then, Thursday, the Italian daily newspaper La Repubblica reported that the Pope decided to resign Dec. 17, the day he received the findings of a probe into the “Vatileaks” affair, including allegations of a network of gay priests and the blackmailers they’d attracted.

Meanwhile, it was disclosed that Pope Benedict has undergone heart surgery, providing a reasonable explanation for leaving any job – except the one of being God’s chosen representative on Earth.
The Pope cited his “incapacity to adequately fulfill the ministry entrusted to me” in “today’s world, subject to so many rapid changes.” This was the same week the producers of Maker’s Mark announced they were lowering the alcohol content of their bourbon: Here was the leader of the Catholic church bemoaning his inability to adapt to a changing world. Has everyone forgotten their brand? Since when did the Catholic church agonize over its inability to respond to change? Not responding to change is what the church does best.

But then, on the heels of the Pope’s announcement another story broke, almost as though he’d sought to get in front of it – a story I like to believe is more likely to explain his hasty retirement: A team of Japanese scientists has announced the discovery of a sea slug that has a disposable penis.
Sea slugs are hermaphrodites. As human knowledge grows, God’s occasional whimsicality with sex organs is something the church has had to confront. An animal with both sets raises questions for a church so particular about gender roles. And given that Pope Benedict XVI’s predecessor, John Paul II, took the position that animals have souls, the soul of a sea slug in a body possessed of two sets of sex organs might have been a worry to the pontiff.

I’d like to believe that while these things weighed heavily on him, like other popes before him, the Pope grappled with their theological implications, as was his lot, until news came of a sea slug that, post-coitus, drags his/her penis alongside him/herself for 20 minutes before casually discarding it and then growing another one within 24 hours – and that proved too much. Consider the moral issues a detachable penis raises: If one of God’s creatures uses a different penis every time he has sex, is he a virgin each time? Would any sea slug drawn into the service of the Lord have to stop being a priest for the 24 hours she didn’t have a penis?

All of this would be enough to throw any pontiff into spiritual crisis, but, what’s more, the sea-slug penis in question appears to be covered with tiny spines that scrape out any competing sperm inside the vagina-like organ of his/her partner as he himself attempts fertilization. Thus, he disposes of his rival’s seed when he ditches his used penis. We’re confronted with a removable penis that is also an effective, though selective, form of birth control. What Pope wouldn’t feel overwhelmed?

Word has it that Benedict will issue a decree speeding up the process of appointing his replacement. While the pontiff is fatigued, he recognizes that there must be guidance – during this, the age of the disposable penis. 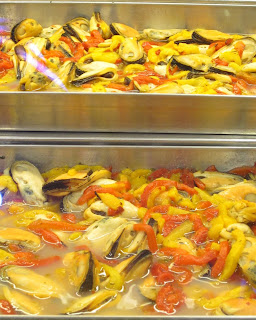 The picture is of some naked bivalves (mussels). It's the best I could do :)

I hope that I haven't offended anyone. I was raised a Roman Catholic, so I have a bit of an inside track :)

Have an amazing day!!
Posted by Carol Tomany at 6:58 AM