This is not about the comic strip, sorry.  It's about a device in medieval castles that I have totally misunderstood. I know, why should I worry about not understanding a bit of architecture that was in use 1,000 years ago, well, because I'm a masochist - enough said.

Anyway for years I always though that the "sally forth" - an obscure exit from a medieval castle - was a way of escape. For example, when it looked like you weren't going to beat the enemy, you could just slip out the back door and run for the hills.

Not so. This obscure little doorway was actually used by the defending army. They would sneak out this exit, circle around and come up behind the enemy, thereby running a counter attack - very clever.

We actually have the equivalent of a Sally Forth in our back fence. Our yard is very close to a major crossroad, with lots of small shops and pubs. Many of our neighbours have put doors in their back fences to allow easy access to these conveniences. When the kids were little I didn't want them slipping out a door onto a busy street, so we just built a regular fence.

Well as the kids got older, they found that when they got off the bus, it was quicker to slip through the apartment's parking lot, hop the fence to our yard and voila they were home. The alternative was to walk the equivalent of three blocks, and come in through our front door. Clearly this wasn't going to happen.

However, when they started coming home after midnight, the fence wasn't as easy to climb in the dark and very difficult in a mini skirt and heels, so we decided to put in a door.  This was not easy, without maybe re-doing the entire fence.  However, one clever carpenter was able to create this masked doorway through the slats of the fence, which, although small, was better than the peril of climbing over the fence. 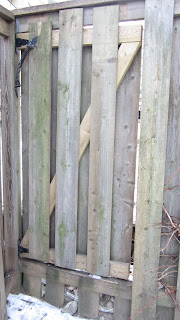 We don't use it to exit and then circle around to run counter attacks on the neighbours :)  but we have used it to avoid a neighbour or two on the street who would inevitably engage us in an unwanted conversation, if we left the house by the front door.

Either way having a somewhat "mysterious" exit/entrance at the bottom of the garden, is the sort of irregularity that I enjoy.  Life is too short to always do the expected and predictable. Create a little mystery in your comings and goings.

Have an imaginative day!!!