I have decided that I am not a poor speller. My problem with typos stems from the arrangement of letters on the common keyboard. Why anyone would put "f" so close to "d," such that any word that ends with a "d," often ends up ending with an "f" - are you still with me? So what should have been "I did it "- becomes "I dif it" or something like that.

Similarly putting the "p" beside the "o" creates errors, such as "sp you think ypu can type?" or worse. I did a little research on the construction of the typewriter keyboard. Wikipedia has an extensive description of the evolution process. A lot of the decisions about where to put letters depended on the early mechanics of the machine and its ability to "jam." Hence more frequently used letters were separated so their keys would not interlock.

Letter arrangements were also made to facilitate two-handed typing for speed and again to avoid jamming. I know it is all really about the mechanics, not the semantics.


I did enjoy the note at the beginning of the article from Wikipedia about the standardization of the keyboard across all patents. Can you imagine if every company that produced a typewriter and subsequently a computer keyboard had a different arrangement of letters?

For some reason the creators of the calculator and the telephone number pads never spoke, because as any accountant will tell you, after a day of number crunching, when you pick up the phone to dial home, you usually end up dialing a wrong number. Conversely, if you have been on the phone all day, and you have to balance petty cash at 5:00pm, it never balances the first time :) 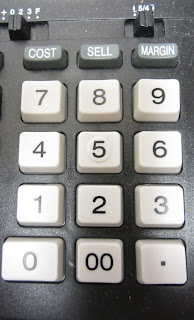 Adding machine keypad - notice where the numbers 1, 2, and 3 are.

Just one way to explain our topsy turvy world. BTW if you missed the explanation of Qwerty - it's the first 6 letters of the first line of letters on the keyboard.