Before Christmas, my son had a friend staying over for a few days. Well one night Alex went out to get some snacks from across the street.  The kids all use the door in the fence at the back of the yard to get to the shops, because it's quicker.  When he got back he said that he'd seen a rabbit in the back yard. It made me wonder what type of snacks he was getting.

I was always under the impression that rabbits were diurnal, like squirrels, and therefore they wouldn't have been out at night. I know that we have a lot of critters in our yard - raccoons, skunks, even the odd rat, but a rabbit - never. I dismissed the incident and presumed that he had mistaken a raccoon for a rabbit.  It did make me think, though, of all those stories about imaginary rabbits and I resolved to keep a closer eye on what they were drinking and smoking. 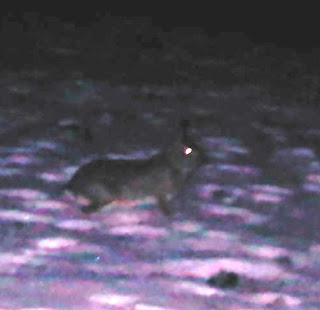 Now I might have thought, alien creature, if I hadn't seen rabbit tracks all over the garden, in the snow. 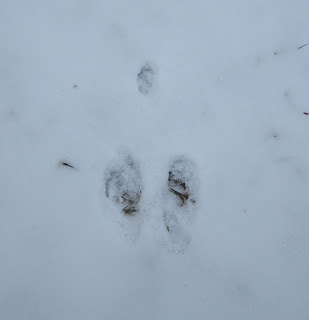 So now we can add rabbits to our menagerie. I wonder how they are surviving in the cold. I hope that it isn't someone's pet who has escaped.  Oh dear now I have another animal to worry about. Rabbits are actually crepuscular - meaning that they are active at dawn and twilight. I think that there should be a crossword society for people to post those impossible words that no one ever uses unless it's 47 down and starts with a "C." :)  Then again I could start an Easter bunny society....maybe.

Have a wonderful day!!!