This is day 42 in the 2013 blog-a-day challenge. I decided to post about the number 42 today because it is the meaning of life according to the Hitchhiker's Guide to the Galaxy. Fortunately it falls on a weekend this year.  I always think that weekends are more about life or at least the fun "things" in life. I know that lots of people have spent tons of time trying to decipher the meaning of 42 as it applies to life.

Here's my take on it. Perhaps the meaning of life is just as random as Adams' choice of the number 42. Put another way. Life is a random collision of events, objects and people thrown together because of the chaos that we are all in :) Please post your ideas.

Here are 42 things involving the number 42, that you probably didn't know, or at least didn't know all of them :)

1. Queen Victoria's husband Prince Albert died aged 42; they had 42 grandchildren and their great-grandson, Edward VIII, abdicated at the age of 42.
2. The world's first book printed with movable type is the Gutenberg Bible which has 42 lines per page.
3. On page 42 of Harry Potter and the Philosopher's Stone, Harry discovers he's a wizard.
4. The first time Douglas Adams essayed the number 42 was in a sketch called "The Hole in the Wall Club". In it, comedian Griff Rhys Jones mentions the 42nd meeting of the Crawley and District Paranoid Society.
5. Lord Lucan's last known location was outside 42 Norman Road, Newhaven, East Sussex.
6. The Doctor Who episode entitled "42" lasts for 42 minutes.
7. Titanic was travelling at a speed equivalent to 42km/hour when it collided with an iceberg.
8. The marine battalion 42 Commando insists that it be known as "Four two, Sir!"
9. In east Asia, including parts of China, tall buildings often avoid having a 42nd floor because of tetraphobia – fear of the number four because the words "four" and "death" sound the same (si or sei). Likewise, four 14, 24, etc.
10. Elvis Presley died at the age of 42.
11. BBC Radio 4's Desert Island Discs was created in 1942. There are 42 guests per year.
12. Toy Story character Buzz Lightyear's spaceship is named 42.
13. Fox Mulder's apartment in the US TV series The X Files was number 42.
14. The youngest president of the United States,Theodore Roosevelt, was 42 when he was elected.
15. The office of Google's chief executive Eric Schmidt is called Building 42 of the firm's San Francisco complex.
16. The Bell-X1 rocket plane Glamorous Glennis piloted by Chuck Yeager, first broke the sound barrier at 42,000 feet.
17. The atomic bomb that devastated Nagasaki, Japan, contained the destructive power of 42 million sticks of dynamite.
18. A single Big Mac contains 42 per cent of the recommended daily intake of salt.
19. Cricket has 42 laws.
20. On page 42 of Bram Stoker's Dracula, Jonathan Harker discovers he is a prisoner of the vampire. And on the same page of Frankenstein, Victor Frankenstein reveals he is able to create life.
21. In Shakespeare's Romeo and Juliet, Friar Laurence gives Juliet a potion that allows for her to be in a death-like coma for "two and forty hours".
22. The three best-selling music albums – Michael Jackson's Thriller, AC/DC's Back in Black and Pink Floyd's The Dark Side of the Moon – last 42 minutes.
23. The result of the most famous game in English football – the world cup final of 1966 – was 4-2.
24. The type 42 vacuum tube was one of the most popular audio output amplifiers of the 1930s.
25. A marathon course is 42km and 195m.
26. Samuel Johnson compiled the Dictionary of the English Language, regarded as one of the greatest works of scholarship. In a nine-year period he defined a total of 42,777 words.
27. 42,000 balls were used at Wimbledon last year.
28. The wonder horse Nijinsky was 42 months old in 1970 when he became the last horse to win the English Triple Crown: the Derby; the 2000 Guineas and the St Leger.
29. The element molybdenum has the atomic number 42 and is also the 42nd most common element in the universe.
30. Dodi Fayed was 42 when he was killed alongside Princess Diana.
31. Cell 42 on Alcatraz Island was once home to Robert Stroud who was transferred to The Rock in 1942. After murdering a guard he spent 42 years in solitary confinement in different prisons.
32. In the Book of Revelation, it is prophesised that the beast will hold dominion over the earth for 42 months.
33. The Moorgate Tube disaster of 1975 killed 42 passengers.
34. When the growing numbers of Large Hadron Collider scientists acquired more office space recently, they named their new complex Building 42.
35. Lewis Carroll's Alice's Adventures in Wonderland has 42 illustrations.
36. 42 is the favourite number of Dr House, the American television doctor played by Hugh Laurie.
37. There are 42 US gallons in a barrel of oil.
38. In an episode of The Simpsons, police chief Wiggum wakes up to a question aimed at him and replies "42".
39. Best Western is the world's largest hotel chain with more than 4,200 hotels in 80 countries.
40. There are 42 principles of Ma'at, the ancient Egyptian goddess – and concept – of physical and moral law, order and truth.
41. Mungo Jerry's 1970 hit "In the Summertime", written by Ray Dorset, has a tempo of 42 beats per minute.
42. The band Level 42 chose their name in recognition of The Hitchhiker's Guide to the Galaxy and not – as is often repeated – after the world's tallest car park. 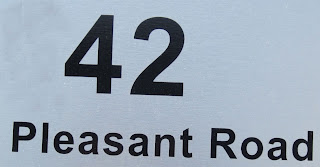 Hopefully you are parked on a Pleasant road for the duration!!