Yesterday Feb 4, 2013, the Canadian government phased out the penny. I know other countries have done it and survived. Britain obviously, at one time, phased out the farthing and the half penny (pronounced hape-knee) before it went to an entirely new monetary system, which axed the threepenny (pronounced threp-knee), sixpence, half crown, crown and guinea. 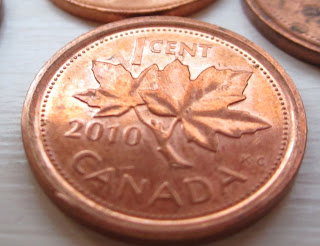 "Spend a penny" is a polite term in Britain for having to use the washroom, because you had to put a penny in a contraption on the outside of the door to a washroom stall, in order to open the door and subsequently use the toilet. Hopefully you always had the right change! I think that most of the public washrooms in North America are free, so phasing out the penny shouldn't effect daily ablutions.

Most stores are rounding to the nearest nickel, either automatically, or manually. The girl who served me in The Second Cup yesterday got it all wrong and rounded to the nearest $5.00. She had actually short changed me $5.00.

Change, however small, is always a trial. I understand that the government will save $11,000,000.00 by not having to mint any more pennies. Probably just a drop in the bucket for them.

So I guess that I had better round up my copper coins and cash them in before they change the expression to "a penny saved is a penny burned" and I lose the few dollars that I might have had by saving all those pennies :) 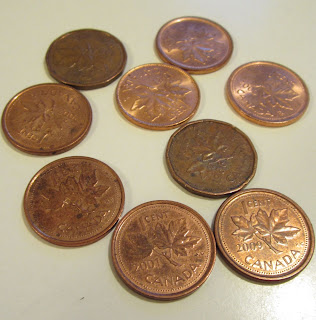 Have a thoughtful day.
Posted by Carol Tomany at 7:48 AM