Pizza and the Passing of Time.....

Yesterday our youngest turned 20. My husband said, "Now we have no teenagers in the house anymore."  I nearly cried.  It's the dichotomy of the human condition - you want them to grow and be successful, but you also want them to stay and keep the family together, as it were.

Anyway, when the kids were young, we always had for their birthday dinner something they liked, which was usually pizza and their favourite cake. We even extended the pizza and cake to the parents' birthdays, so that everyone got to enjoy a free evening! Hence five times a year, we marked the passage of time with pizza.

Occasionally the toppings changed. Mushrooms and green peppers were added to cheese and pepperoni as tastes matured. Cakes moved from traditional chocolate to more exotic mocha and finally to small delicate French pastries. The size of the party also changed. For years there was always five for dinner.  As the kids went away to university the numbers dropped to four or even three and some years we didn't even celebrate a birthday or two because the birthday person was away.  This year there was just three. My husband, myself and the birthday celebrant, Nicholas. 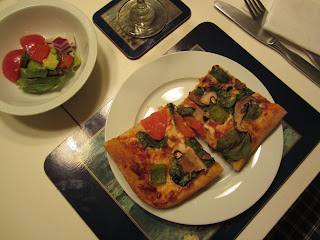 The pizza was different too.  This year it was a gourmet vegetarian pizza from Piazziolo. The toppings were mushroom, green pepper, herbed tomatoes and spinach. Although it tasted fine, it looked a little disgusting because of the wilted spinach. Fortunately, the French lemon tarte was fabulous.

Birthday trimmings also changed over the years.  The balloons and streamers went earlier.  The fancy candles and cards from the cats went a little later. We used to make an effort to at least get candles that represented the year, but as you can see this has morphed to one candle and I was lucky to find that one. There was also just one card and one gift - "lots of money." 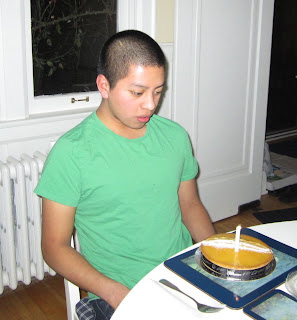 Celebrate each day, even if it means wilted spinach and a left over candle. Make it rich!!