Here are some more ideas for naming children after cars or their parts :)

I just had to explore this idea of choosing names for children a little more.  Celebrities often select their stage names for effect - "Lady Gaga" is one. "Madonna" happens to use her own name and some people think that Englebert Humperdink uses his real name too.  I wonder if you can sue your parents for a really awful name.

Perhaps celebrities chose names for their children based on the same criteria they apply to their branding - shocking effect!!  Here is a site that lists the names or at least the more unusual names some celebrities have given their children. I can't get over Frank Zappa's choices - Dweezil (son), Ahmet Emuukha Rodan (son) Moon Unit (daughter), Diva Muffin (daughter).

I know that people make minor name changes, such as legally changing a name from Audrey to Heather - not sure why. My sister changed her name from Maureen to Rene (Ree nee) because that was what everyone called her. I often wonder why some people get nicknames that just "stick." I have a friend who was "Tinkerbell" in a school play and she has been called "Tinks" every since. I also know an Elizabeth called Buffy and a Carol Jean called Cookie. Coco Chanel was really Gabrielle Bonheur Chanel.

I can understand why transgendered people change their names.  I know of two Kates who are now respectively Ben and Brodie.

There is a house down the street which changed hands regularly, however before the respective families moved on, they each managed to have a child called "Evan." (3 in total). The family who lives there now have a girl, Eva. If her second name were Nancy then she would be Eva N.

Names are fascinating and may determine your personality. Are Emmas quiet readers? Are Chantels performers? Are Michaels macho and Jullians studious?

Now back to those car parts from an earlier post.  Mustang Sally lives!!  The photo is courtesy of Kevan George from the I Love Photography group.  Thank you Kevan. 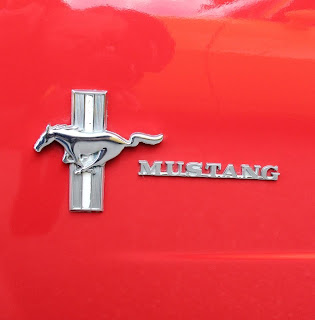 Have a phenomenal day!!