How old is your postman..?

I have a love hate relationship with postmen.  For the most part I love them. The one that brings our mail to the house is a gem.  He waves to you on the street;  he smiles and he delivers the mail!!

Now letter sorters are a different breed.  We often get mis-directed mail.  I wonder how often letters for us are delivered to someone else's house. So yes we get mail; but it's maybe not ours.

Then there was the time, when I still worked from home, that I was desperately waiting for a cheque from a company in the US.  It was long over due.  I had called.  The cheque (check) had been sent. Well curiously, one day, as I was walking back from a neighbours,  I saw a piece of paper on the sidewalk in front of my house. It was an envelop addressed to me. I opened it and inside, sure enough, was the errant cheque. I was in shock.  How did it get there?  Anyone could have picked it up! It's still a mystery!

The postmen, where I work now, are generally good, if you can get one to come. For the last few months we have had terrible mail service.  The building's owner has called Canada Post repeatedly.  Apparently no one wants to work the route.  Well our location, in particular, is a rabbit warren of small businesses on three floors in two buildings. Other shops on the street have their own complications. There are apartments or offices above the shops, each with their own letter box. One unit, for example, can house several businesses as people patch together incomes to survive. We are a logistics nightmare.

Well yesterday topped it off. A post office worker or a subcontractor came down stairs to inform me that he had 4 large boxes to deliver. He looked around in horror. "This is it?" he said. "There's no elevator, no loading bay?" I knew the boxes would be big; but they would be light. I said that I would come and help him. I held the door open while he came in with one box. He dropped it on the landing and went back for more.  I picked it up and carried it down 2 flights of stairs. It was large, but light and easy. I went back for the others. The postman was stunned.  He said, "Where did they go?" I said that I had simply taken them downstairs myself. Then I paused, looked at him and said with a wink, "And I'm probably twice your age."  He did have the courtesy to smile!! 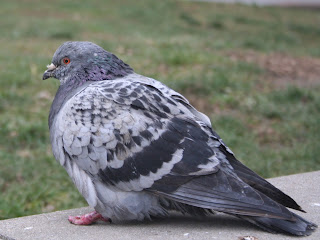