Today we had planned an outing on the Bruce Trail. However, we were undecided as to which access point to take - Limehouse or Mono Mills. Finally, we opted for Limehouse because it was a bit closer and headed off. No sooner had we arrived when the heavens opened and it poured.

At this point things weren't looking very grand or very gorgeous - 2 of my 3 focusing words for the day. We decided to forego our picnic lunch and take a gamble that a restaurant in Rockwood was still operating and open today - Eureka!!  It was.  It is actually a lovely spot in an old stone house right on Hwy #7. It used to be called Le Vieux Auberge - but it is now called - "Heaven on Seven." It was a better out pouring of the heavens than rain!!  The food was very good, the beer was local, but the best "thing" about this spot was that it had an old jukebox which played vintage 45's from the 60's and you didn't even have to put in money.  This was indeed a "Grand" find!! 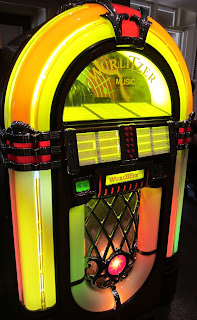 We waited out the rain listening to The Beatles, The Everly Brothers and The Beech Boys. The clouds were still heavy after the rain had stopped; but we took another gamble and headed back to Limehouse. The rain held off long enough for us to get a decent walk along the trails - over rocks, down through deep crevices and passed quaint stone bridges.  The views were gorgeous - literally. 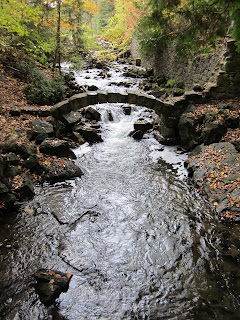 Here is another from one of the gorges. 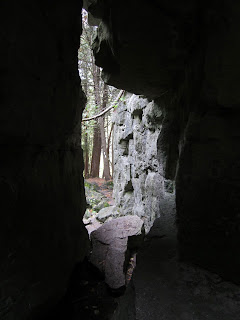 Serendipity was with us.  We ended up having an amazing day and topped it off with a birthday party for our eldest - he turned 30 today.  I still can't believe it!! 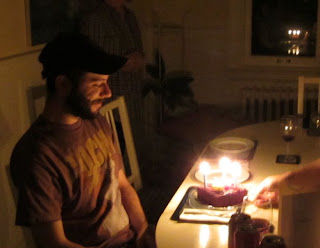 Tomorrow is an H-Day.  How about hallowed, haute and holy.  As in holy holidays, Batman.

Hope you have an amazing day.