On the drivers of pink cars....

This is an extension of an earlier post that has had a few "clicks" lately. I was following someone who was using the letters of the alphabet to create posts using 3 words that begin with that letter. This post was for the letter "X." I have extended the post with a fictional account of the owner.

I may suffer from Xenophobia and don't know it - but I don't think so. I remember the first time I had to transfer money into someone's bank account in South Korea for an order of shell buttons. I transferred an amount that I felt I could just "lose" in the leap to do some importing.  Well, when the buttons didn't arrive, I was a little dismayed.  I e-mailed the person and suggested that I would have to get in touch with the Canadian Trade Commission to track him down and get my buttons!!  The next day a Fedex truck pulled up in front of my house and lo and behold there were my buttons - now it cost me - a Fedex shipment from halfway around the world is not cheap - but it worked out.

I regularly transfer money into a bank account in Nepal for my silk yarns and fibre.  I didn't know the person from Adam, at the time. However, we are now linked on FaceBook!

I am in another one of those situations, however, it is in Canada; but the firm has to do a special order for me and I have to place the order, sight unseen, and hope that it is something that will work out. I just have to decide on the amount of money I am willing to lose in the plunge.

There are few guarantees in life. We can try to hedge our bets and cover off some of the more obvious risks - but in the end it all comes down to a leap without a parachute or safety net - Geronimo!!

I didn't use an "X" yesterday; but I thought a lot about the sign. I realized that in a few weeks an entire nation will decide their future with a collective "X." Scary when you think about it!!

Looking beneath the surface (X-ray) begins by connecting with the surface. I like to think that my camera is my X-ray equipment.  I try to find the meaning of "things" in compositions, in faces, in nature and anything else I may find of interest. 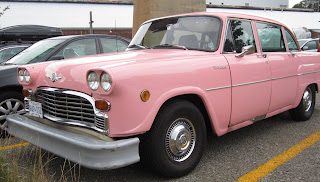 Such as this old pink car that I see regularly at the market. It is driven by a women in her 70's and I am very curious as to why it is pink. It is the same type of car (Checkers) that is used by taxi drivers in NY - theirs are yellow, though, not pink. Also, it's in relatively good condition, given its 30 odd years of service.  There's a story here. A good reporter would tell us!!

"Now I can imagine, since I have seen her emerge from the car on one occasion, that she was very beautiful at one time. She has retained her slim figure, but the glow of her skin has faded. Her hair has thinned and that once effortless walk, is now more awkward. I she may have been an executive for a cosmetic company, where image is everything. What of her image now, maybe it's just the car - striking in shape and colour, though a little worn.

She still drives and gets out every Saturday morning to the organic market. Maybe the cosmetics she once wore were laced with chemicals and she is now paying the price. I wonder, whom she feeds at home, with this purest of pure bounty. Does she care for an ageing partner, or does she live alone. I wonder too, if she has children or friends.

But, why has she kept the car? Was it a gift? Who gives a beautiful woman a gift of a pink taxi cab? Perhaps there is no money now for a new one. Then again, if everything she ever was, is summed up in that car, why would she ever part with it?"