7 ways to elevate/alleviate a rainy day!!!

Yesterday it rained - all day and today it's still raining and it is forecast to rain until Thursday. Well yesterday I moped around until about 3:00pm because I couldn't get out - I know I could, but I would get wet and I'm a whimp!!

1. Clean out the cutlery drawer.  Mine always looks a little disgusting with bits and pieces just chucked in, to get them out of the way - elastic bands, left-over wine labels from when we used to make wine, 4 or 5 bottle openers, several can openers, that don't really work and lots of toothpicks and skewers - not sure why - but they were there. Oh and did I mention the crumbs - maybe better left unsaid :)

I now feel very pure in the cutlery department!!

2. Clean out the spice cupboard. Finally after 30 years, I decided to throw out baby food jars that I had used to store things like whole nutmegs - I had 1 and a half left. Whole cardamon pods - 3 left. Star Anise - 6. Several ground powders that had lost their labels and their aromas, so I didn't know what they were anymore!! I kept a whole jar of poppy seeds - time to make something with poppy seeds!!

Definitely fresher in the spice department!!!

3. Attempt to tidy another cupboard. Over the years the kids would go shopping every once in while with their dad and the grocery bills would spike!! Apparently we needed a large box of ice cream cones - it's virtually full and still at the back of the cupboard. Several plastic jars full of juice crystals also almost unused. Plus soy peanut butter, Nutella, flavoured coffees, teas etc.....the list goes on, of treats recommended by friends, TV, the internet... that they just had to have and ended up abandoning just a quickly. Now Murphy's Law says that if I throw them out, the kids will want them the next day. This is why they have stayed as long as they have!!

Well the cupboard is tidier - maybe not quite as purged as I would have liked - but definitely better!!

4. Carve pumpkins. Of course you have to hollow out the pumpkins first. Then you have to clean up the mess afterwards. It's certainly easier to do outside; but not in the rain and I know that you can only do this on rainy days around Hallowe'en. OK I watched my son carve this one!! 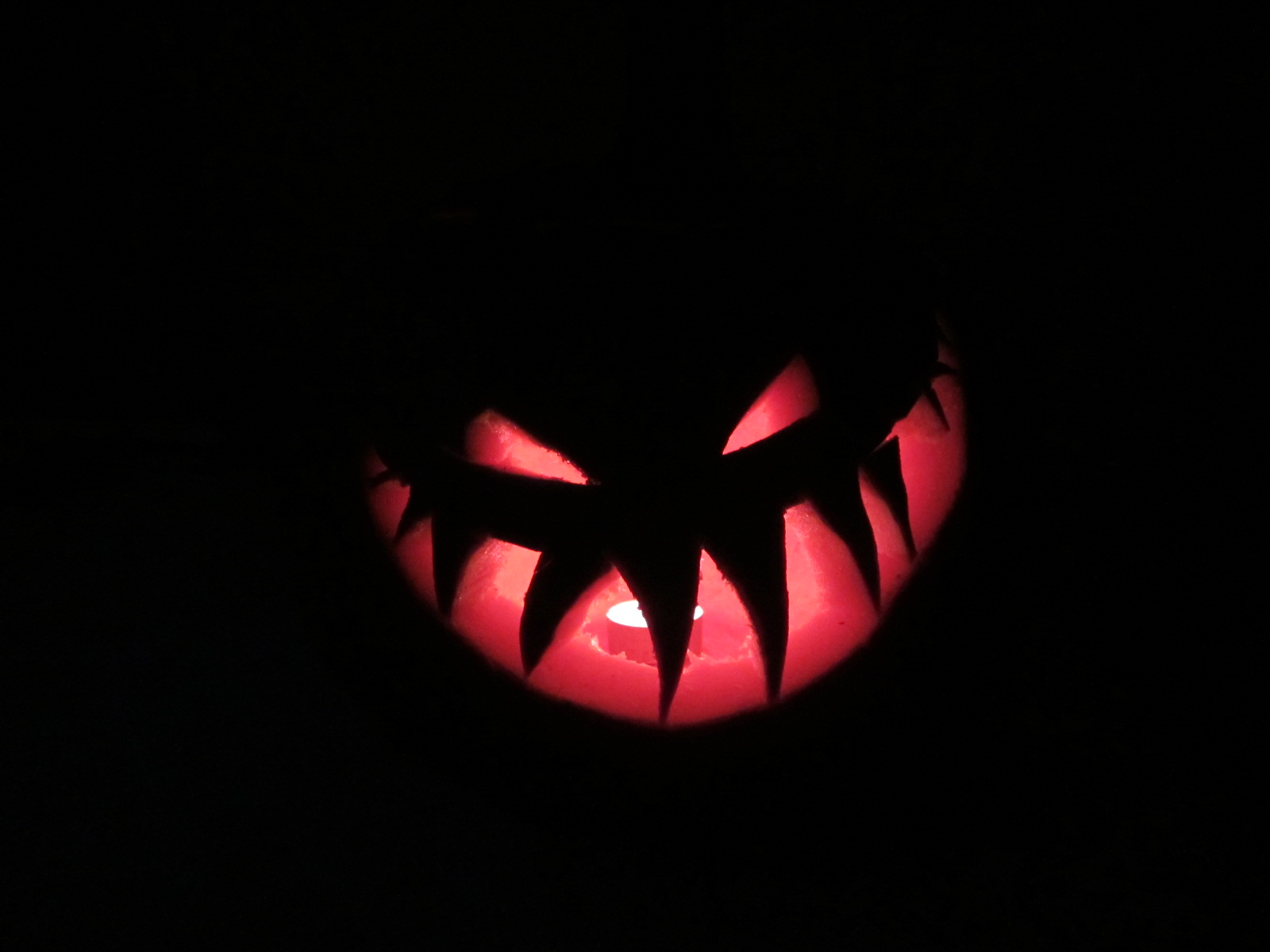 5. Find homes for several, OK many, homeless objects that sleep in the halls all night and all day for that matter. Such as 2 Targus backpacks bought when I first bought the kids laptops to take on holidays with us. (Both the kids and the laptops) They needed to be strong because the computers weighted a ton. A jogging (read walking) belt from the Running Room with places for plastic water bottles. Sadly there was no place for a small camera, so it sits by the door waiting to get another pocket on it to house my Canon Powershot. Overnight bag from the Woodstock festival show. Really they need to invent self-emptying bags and cases - just sayin' :)  This is just the first landing. I will not even attempt the second landing unless there's a hurricane !!

6. Go with a friend for coffee and a pastry. Just getting out helps even if you do get a little wet.

Just a few more wet ones before the sun shines!!! I need to work on some "dry" humour to get through it?