"A good psychic would pick up the phone before it rang." - Ellen DeGeneres.

I have always been fascinated with psychic phenomena.  Maybe it's because reality can be a little boring - day in day out.  I guess that's why we have to work at making reality magical or surreal. Science and hard core facts need a spoonful of sugar from time to time.

I remember one day in one of my Theatre Arts classes, which often began with a warm-up circle of one liners.  Basically, we would go around the circle and each of us in turn would "deliver a line."  It didn't matter what was said.  It was more a way of moving from the reality of the classroom to the creative world of the imagination.  I will never forget what one young woman said.

"Gravity is a myth. The Earth sucks." It was sad and hilarious at the same time. She may have borrowed the line from someone else, I don't know.  But I have never heard it since and I have never forgotten it.

Every once in a while we have to do the unexpected.  Experience the opposite of what science tells us is true.  In short - answer the phone before it rings.  Take in that energy that is out there, but can't be scientifically measured, and use it to create magical experiences.

Maybe this is why I like photography.  The camera sometimes sees what isn't there or it elevates what is there. So something this mundane can be immortalized. 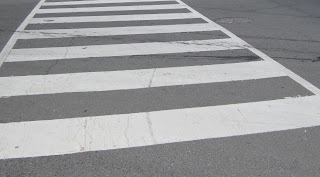 Here are some really amazing images. It's shades of the Yellow Brick Road leading us to another world and all of us have ruby slippers to take us home - but only after we have used them to dance!!

Have a magical day.