Another catch 22 today - actually it started yesterday.  Our wall phone and land line stopped working two nights ago. We suspect that it may have been the cat who ate through the electric cord that powers the phone.  Years ago I opted for a plug in rather than a battery powered one because I never remember to buy batteries.

My husband went shopping for a new cord - they don't exist anymore.  The Bell store does not sell wall phones anymore either so no chance of buying a whole new assembly.  Our last resort is to try "The Source"  and hope that they still do land line wall phones.  I know it's probably time to give up on the land line - another grounding "thing" gone.

Maybe cell phones, the internet, digital stuff are all just tricks by alien beings interested in inhabiting the Earth and need to get rid of us - soon all those things that held us here will be gone and we will disappear into the ether in a puff of something or other!!! I can hear the default cell phone chime playing, as we ascend..or go where ever.

Well, maybe not just yet because we plugged in the phone this morning and it worked - (they were just testing - this is still a trick).  OK so it took us about a half an hour yesterday to navigate the Bell touch tone system to book a repairman to come out.  Now we have to do the same to cancel the appt.  and my guess is the phone will not be working this evening :) 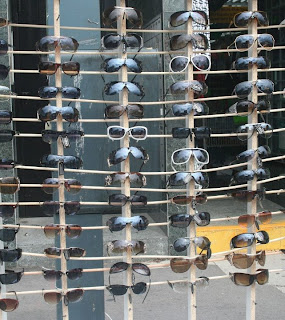 This is what I posted for "Eyes" in the latest scavenger hunt.  There are beings out there watching our every move and toying with our lives :)
Posted by Carol Tomany at 9:47 AM