There is such a thing as watching too much CSI!!!  Someone backed into my car the other day, while it was parked in the parking lot.  I was actually amazed to find a note on my windshield with a telephone number and an apology.

Wrong - a very charming voice at the other end apologized and asked if I wouldn't mind getting 2 estimates and then they would give me a cheque for the damage.  I was relieved.  This was Thursday, July 26. By Monday, I had the 2 estimates and both were around $1,000.00. I called.  The charming voice answered and said that he would pay the lower of the two estimates; but he couldn't do that until Wednesday because he was going to Montreal on business. I was dismayed, but I accepted and hung up.

Then I got to thinking - Wait a minute. Today was July 30 and Wednesday would be Aug 1.  The accident happened in the parking lot of The Box Spot, a moving store.  That's it!!! Once he found out that the damage was actually just under $1,000.00 the legal limit - anything over $1,000.00 you are required by law to register with the police, he decided he didn't have to pay and since he was moving out of the province on Tuesday - the end of the month - I was going to be left holding the bag!!!

I called back and got the answering machine.  I was angry.  I left a cryptic message.  RATS.  I did a google search.  I got his address. I couldn't assess from the google map whether his house had a for sale sign on it - but at least I had an address.  I was going to go up in the morning.

Well surprise, surprise.  His wife called in the morning and suggested that I come and pick up a cheque.  Amazing!  It turns out that they were very lovely people just doing the right thing. I hated myself for all the negative thoughts.  Now I have to get the car fixed so I can drive my 1998 Honda Civic another 14 years.  Here is what $1000.00 looks like. 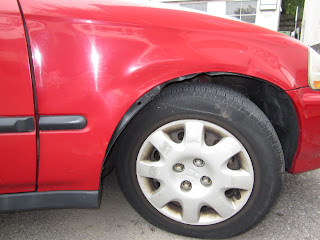 Honestly have a wonderful day!!