...some achieve greatness and some have greatness thrust upon them."  And I would like to add that some just live down the road from greatness and feel that their lives are elevated by mere happenstance or serendipity. 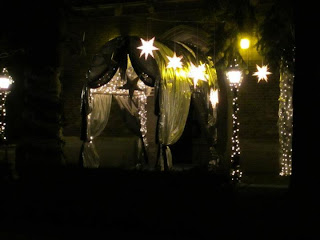 This is what I posted for the heading "old" in the latest photo scavenger hunt.  It's the side door of the local high school - Northern Secondary for any alumni present. "They" have been filming a remake of the classic horror film "Carrie" here all summer.  Well last night they filmed the prom scene and decorated the side doors as an entrance way.  There were stretch limos everywhere!!

I don't know why they didn't just wait until September to film the kids just being themselves - that would satisfy anyone's need for horror!!!  I close my eyes when I round the corner - a little tricky while driving, but the skateboarders manage to get out of the way.

Actually 2 of my 3 kids went there. And when they were very little in strollers, my neighbour and I used to plow through the throngs saying "Coming through.."  It sort of toughened the toddlers up :)

Anyway film companies down the street always create a little excitement - a little sense of this place is a bit more special today. Now if they could only film Pirates of the Caribbean at Harbourfront.

Have a very special day!!